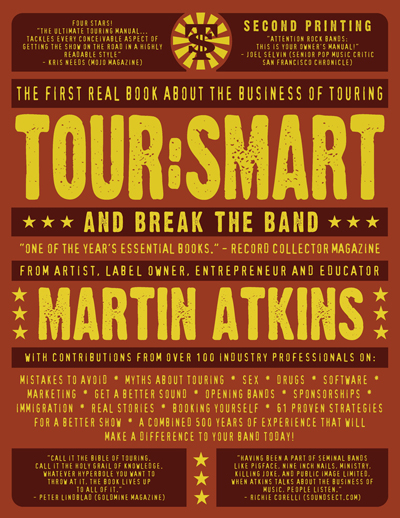 Martin wrote his book Tour:Smart in 2007 and has since spoken around the world, tonight he is joining us in Birmingham to share his experience in nearly every aspect of record production and promotion, his unique perspective not only on where the music industry is currently, but where it is going in the future. – This is a free event!

“Four Stars! The ultimate touring manual. Tackles every conceivable aspect of getting the show on the road in a highly readable style.”
Kris Needs – MOJO Magazine

Martin Atkins is the definition of entrepreneurial activity in cultural arts endeavors, his 30+ years in the music business spans across genres and borders and industries.
He was a member of Public Image Ltd and Killing Joke. He founded industrial supergroup Pigface, The Damage Manual, and Murder Inc., and has contributed to Nine Inch Nails and Ministry. He is the owner of Invisible Records and Mattress Factory Recording Studios (est. 1988). He is the author of Tour:Smart, a Suicide Girls columnist, and a full time lecturer at Columbia College Chicago. Martin is a producer, drummer, documentary film maker, DJ, and father of four. Whatever the future of music is, you can pretty much bet that he’ll be in the middle of it.