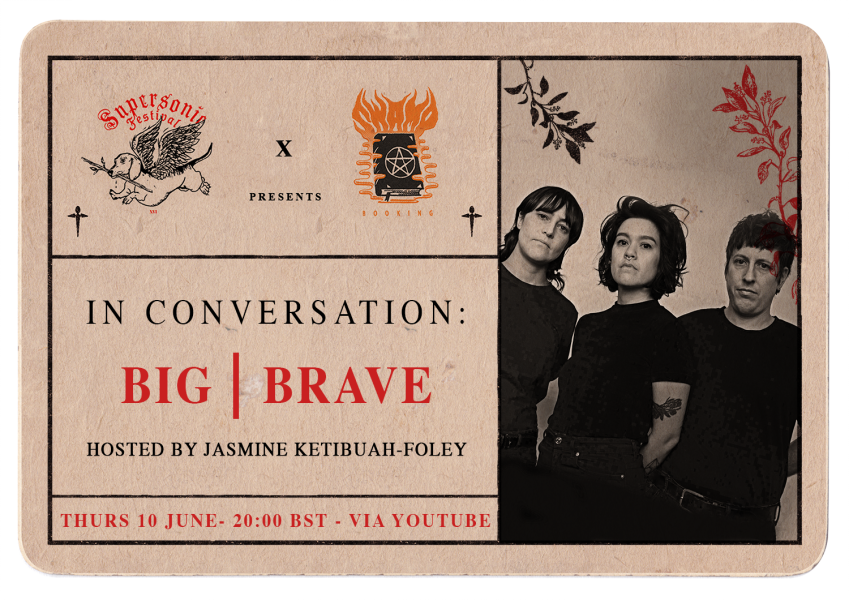 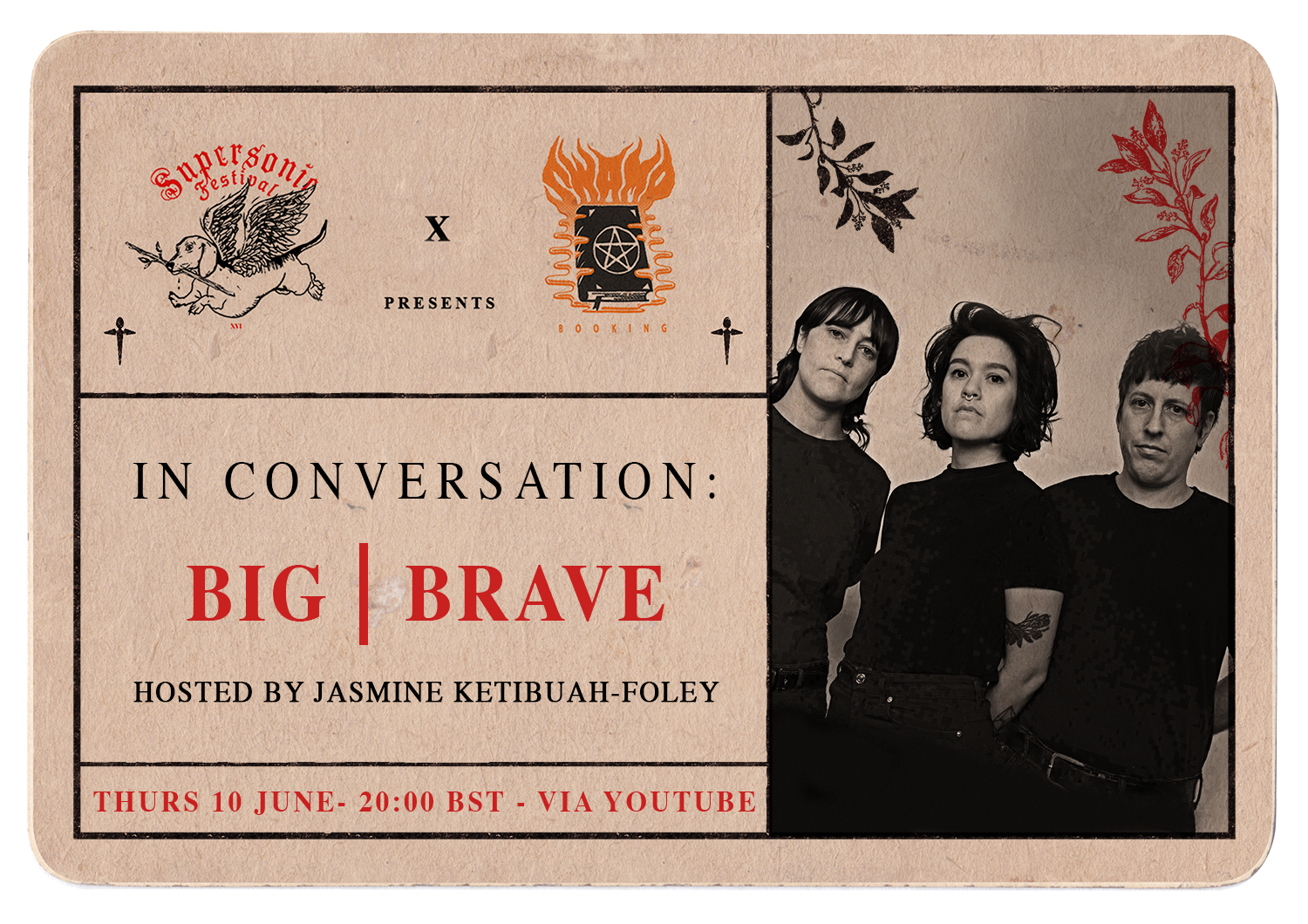 Supersonic was founded and is led by womxn, one of our key aims is to be an inspiring space where womxn, trans and non-binary artists who are creating extraordinary new music are celebrated and recognised.

We’re excited to partner once again with Swamp Booking as we continue our series of online talks that amplify the voices and experiences of womxn, trans and non-binary artists. We’ll be exploring how to create a better working environment and a more cohesive scene, sharing wider perspectives first-hand, whilst also focusing on more specific topics such as the notion of ‘Heaviness’ in creative practice.

With this in mind, we’re delighted to present the trio BIG | BRAVE in conversation on Thursday 10 June 2021. Hosted once again by journalist, Jasmine Ketibuah-Foley, this new edition of our series will explore ideas of great force, intensity and turbulence within music. 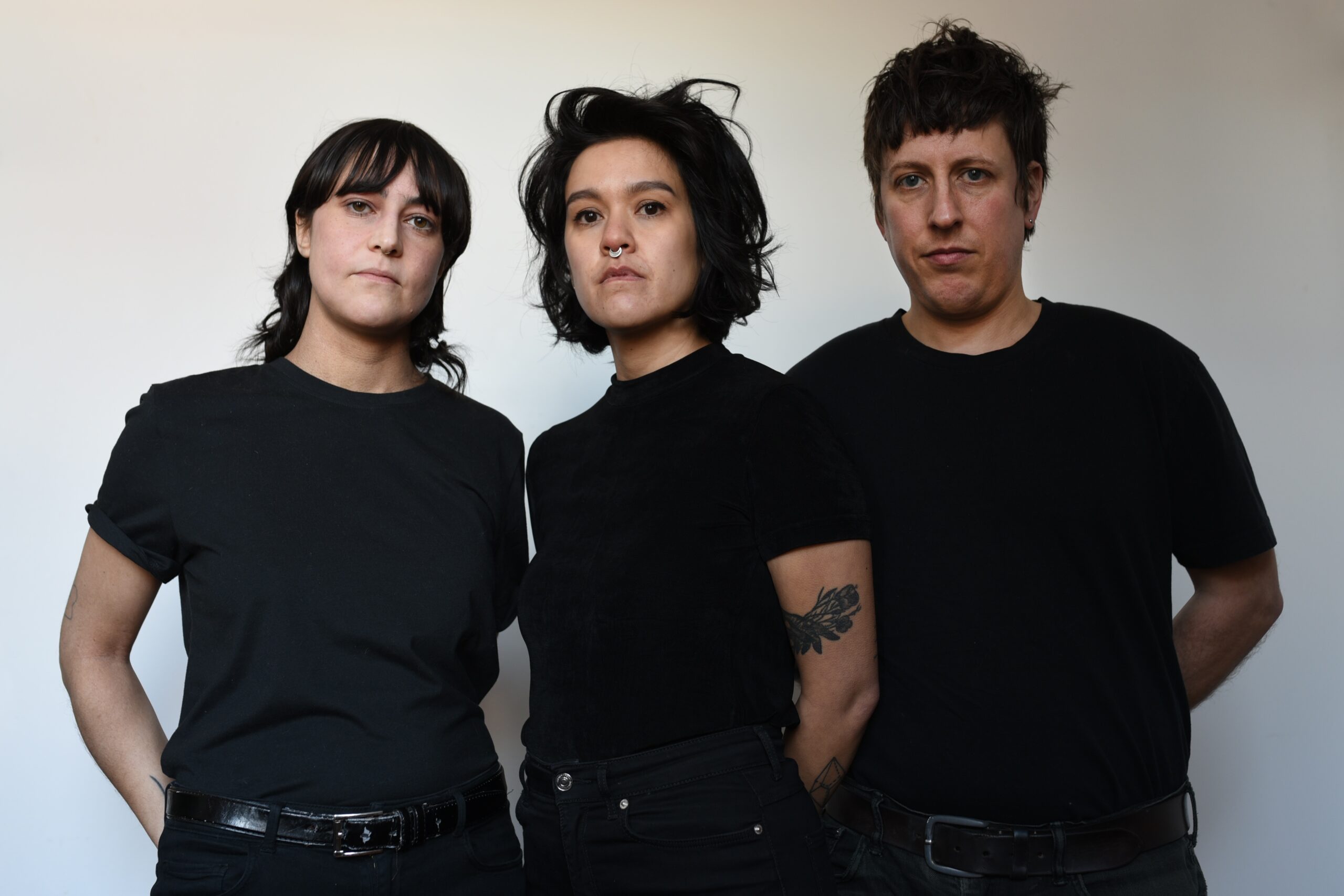 The band formed in 2012, with no other goal than simply experimenting with the instruments in their possession. Band members Robin Wattie and Mathieu Ball started writing subtle ambient/minimalistic folk songs together. After an incident where an acoustic guitar broke, the electric guitar became the permanent replacement, bringing with it larger amps and mass of amplitude. Third member Tasy Hudson joined the ranks in 2018.

It became clear that loud volume would become just as effective as the lowest possible ones and the juxtaposition of both would become something of a signature sound for them.

“Even at their heaviest though, there’s a brightness and optimism radiating at the core of the trio’s sound. Their folky roots really shine through”

Above is the band’s latest music video ‘Big Brave’ – it consists of a single shot of a single performative action that can be read as the representation of the damage an external force can have on someone or something without ever having to bear any responsibility and consequence.  BIG | BRAVE adds “The action of shovelling dirt onto the person, also acts a way to discredit, shame and discriminate the individual. With the victim (on screen), being painfully covered with dirt by the perpetrator (off screen), all we have to witness is the damage done and left behind. We are aware of what is happening, what has happened, but the source is kept anonymous and can easily be missed and overlooked.”

In 2015, the band entered the studio with Menuck and recorded “Au De La”. With no home for the record, they decided to take a chance in writing to Southern Lord. As luck would have it, Greg Anderson happened upon their email among hundreds and responded. Since then, BIG | BRAVE have had a home with Southern Lord Records – they’ve released the band’s latest outputs; Ardor in 2017, A Gaze Among Them in 2019 and VITAL in 2021.

Since their inception, the band has had many honours and privileges of touring a number of times in North America and Europe with bands such as Sunn O))), MY DISCO, The Body, Thou, Primitive Man and Thee Silver Mt Zion.

Swamp Booking is a booking agency representing bands from across the globe in Europe, UK and Latin America.
Swamp Booking was founded by Riccardo Biondetti in Berlin in 2012. Since its foundation, Swamp has grown to become one of Europe’s leading independent agencies, promoting some of the most cutting edge artists in rock and experimental music and paving the way for new and compelling acts. Nowadays, Swamp Booking is well known in the music community for the consistency and diversity of its roster, and for having a finger on the pulse of the underground.