25% of ticket cost will be donated to RSVP, the rape & sexual violence project.

Especially for International Women’s Day 2021, we’ve commissioned six artists to pay homage to their own personal Pop Icons – the result? ICONIC SONICS! In celebration of some iconic womxn music makers and shakers, expect wild interpretations and creative covers of pop royalty presented by the following acts…

These will be screened as part of our evening event with Cosey Fanni Tutti & Maxine Peake. We’re offering an all day ticket for access to all events, or you can purchase tickets for each of the three events separately. 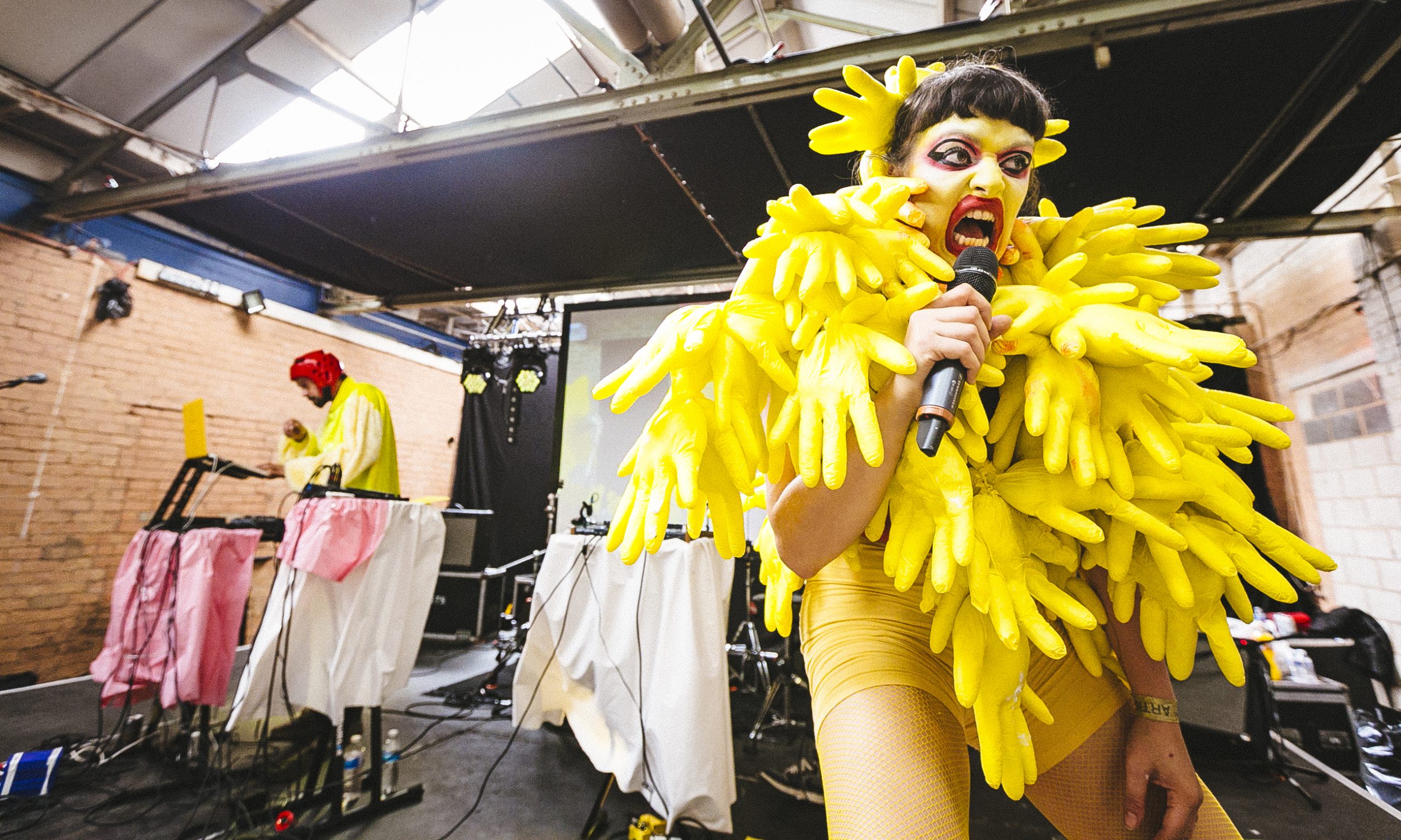 Supersonic veteran, Natalie Sharp aka Lone Taxidermist is known in equal measure for her cosmic synth creations and otherworldly costume designs. Sharp is a disabled artist at the forefront of a new wave of underground musicians, creating immersive worlds for their audiences to participate in. Often working in non-conventional settings, she challenges existing frameworks and expectations whilst exploring issues around gender and sexuality, pain and the body. She effortlessly blends stagecraft with costumes, graphic art, video making, face paint, vocal technique, remixing and DJing, pushing the parameters of live settings.

“I feel like Cosey paved a way of doing art that deeply resonates with me. There’s a lot of parallels between us, not just because we’re from hard ass northern fighting towns and have sea fairing fathers but also because of her approach to art. Through actions and her own personal corporeal expression, Cosey puts her entire being into her art I can hard relate to that” 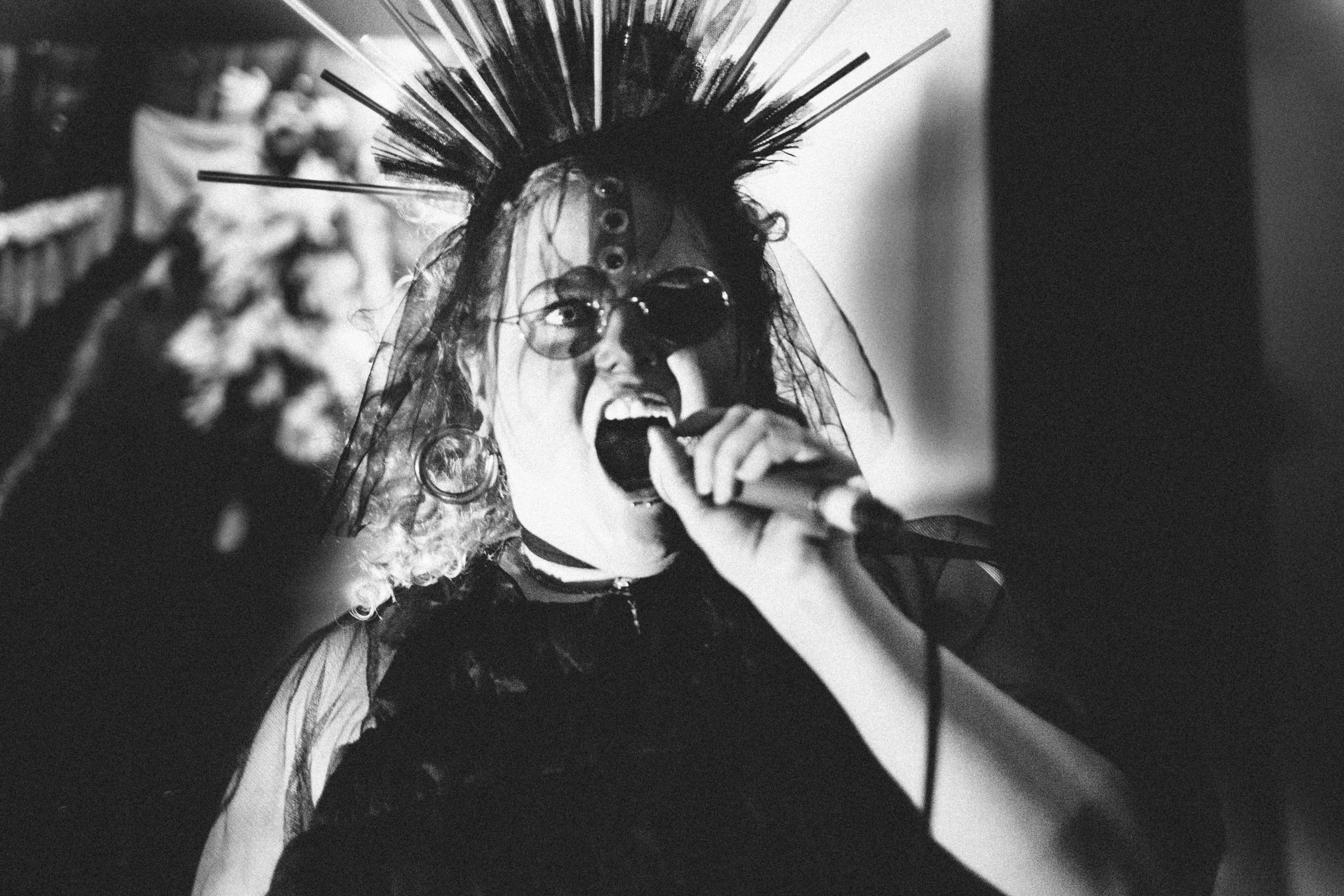 This dark electronic duo are set to collide the world of pop royalty with deep industrial witch music. Based at the Islington Mill in Salford, the duo first met back in 2008 at a Fat Out gig (of Supersonic googly-eye fame). Together, they explore the realms of the dark psyche, taking the audience from depths of meditative intensity to rhythmic industrious beats.

“SOPHIE has been a huge inspiration to GY!PA. Their incredible talents as a producer and ability to make really unique, noisy and challenging pop songs will forever influence our sound. Their recent tragic death sent deep shockwaves through our community and we wanted to cover Ponyboy in tribute and utter admiration for one of the most important experimental producers of our generation.
Thank you SOPHIE for your artistry. You will forever live on as a true icon. Rest in Power you absolute genius.” 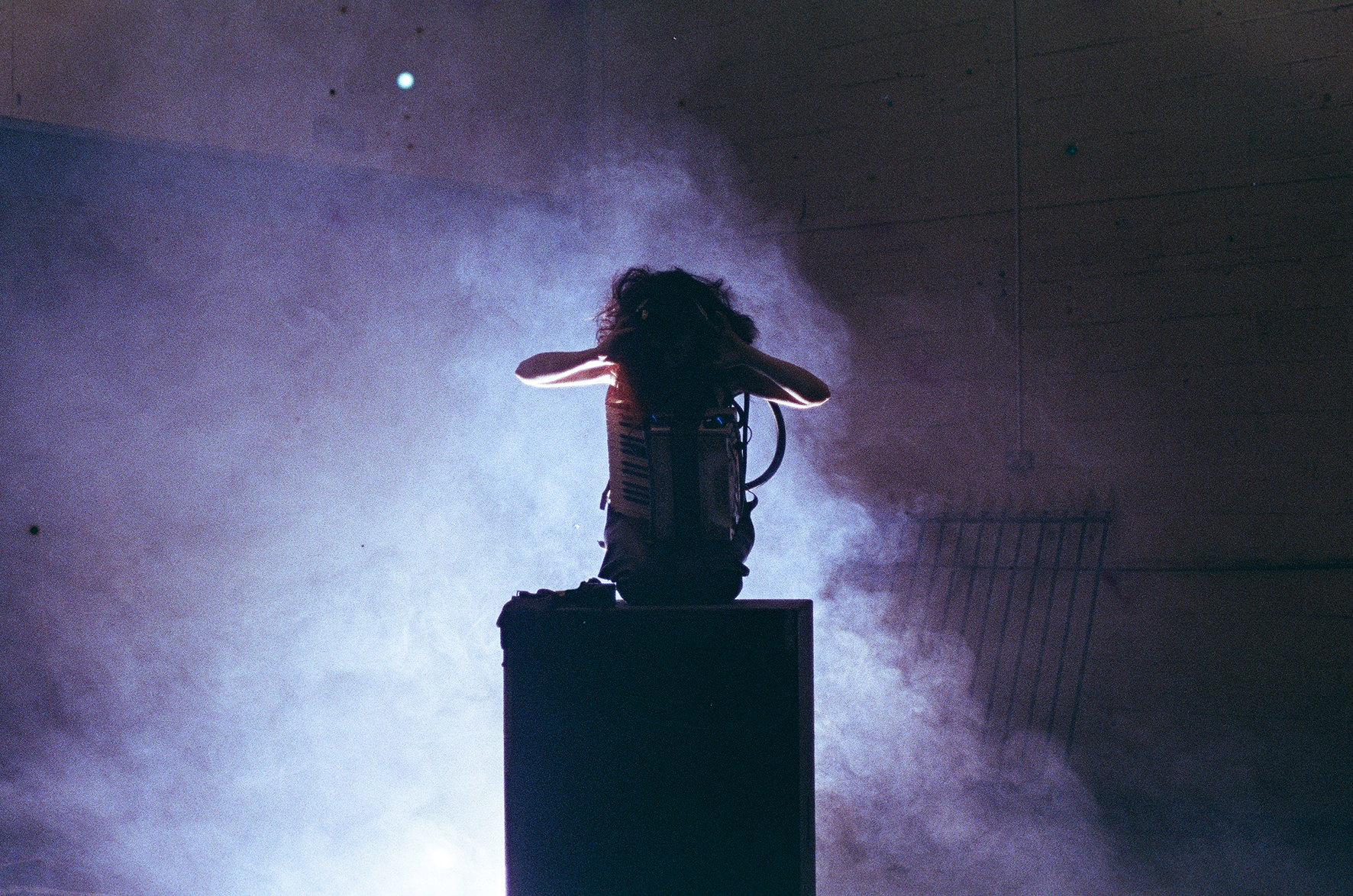 Artist Conny Prantera has built a striking career in illustration, video art, music and multimedia work that takes inspiration from symbolism and visionary art. Her creations are full of dark meditations on man’s relationship to the natural world and the historical vanquishing of matriarchal systems, drawing lineage from magic and esotericism through dreamwork and self introspections. Mostly performing as The Seer, she has produced a multitude of performances that take form as solo or collaborative pieces.

“My fascination with Nico has a lot to do with her as a performer and especially in the beautifully raw underground short The Inner Scar, a strange and spellbinding film by Philippe Garrel. Like the very few successful women artists of her times, Nico’s life was complicated and put under scrutiny in a way that her male counterparts never had to endure.” 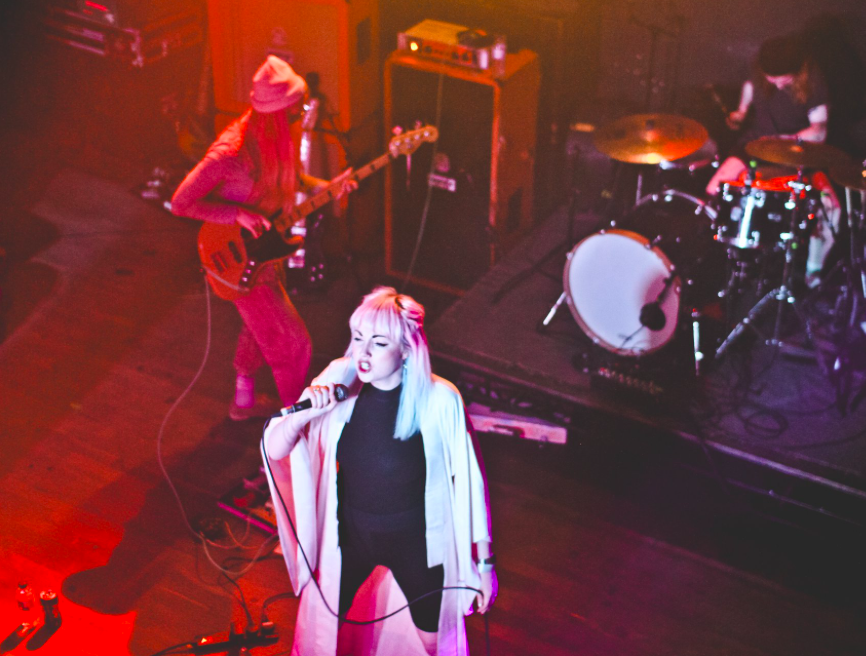 “We chose SOPHIE as she is a hugely inspirational artist and soul who has influenced us collectively and individually. This reworking of FACESHOPPING, has been dissected and reworked by BLÓM, recorded in our practice room, never to be played the same again. This is our tribute to a pioneer, it tastes good and it’s like moisturizer.” 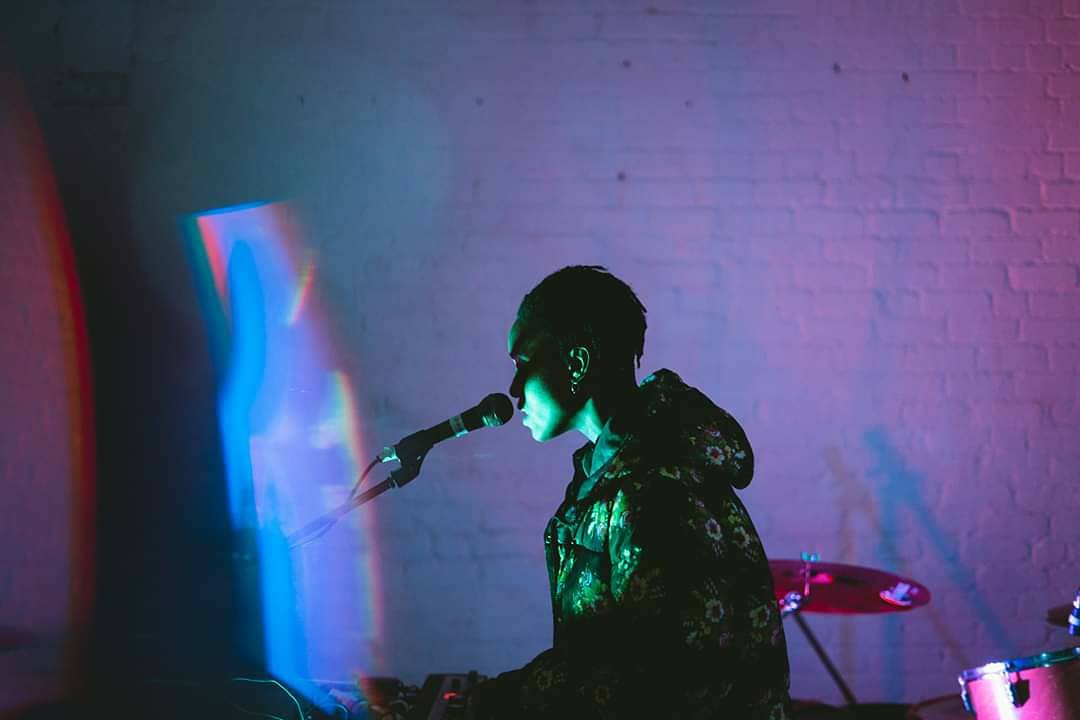 “Grace Jones is just a badass. Firstly, her music and film career is iconic (her performance as Katrina in Vamp is a highlight!) And on a personal level, she’s one of few prominent people I can really recognise myself in. To see an androgynous, Jamaican woman who is sex-positive without being hyper-feminine is something I really valued as a child and still today.” 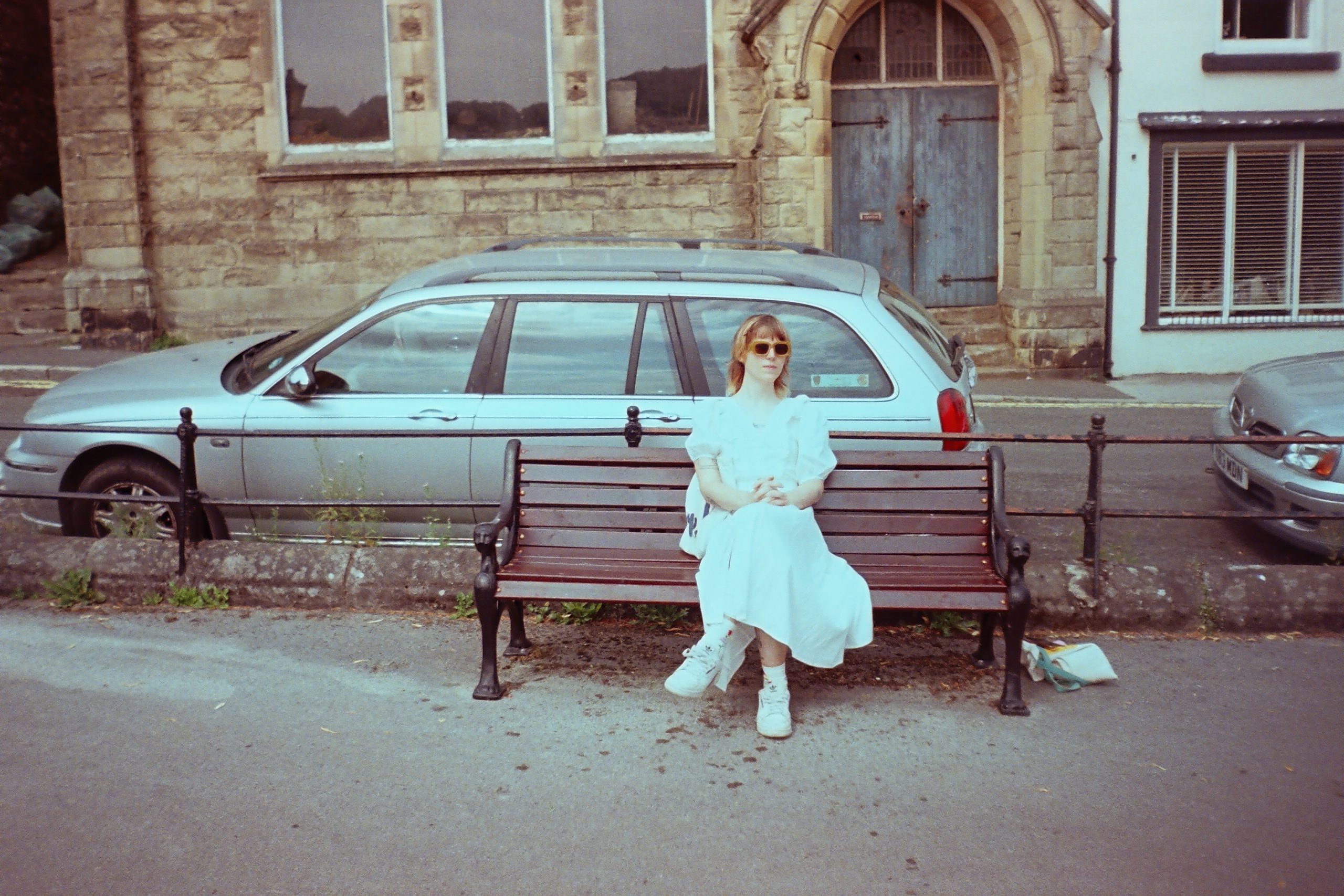 Leeds based experimentalist Sofa King, is the musical output of pop-obsessed transgender individual Dianne Burdon. She treats reverb and feedback like a chemical formula with raucous clashes of Tetris-like guitar beeps.

“What’s important about Kate Bush is her ability to take risks without compromise, it’s why her music holds up, it’s both classic and timeless, something I aspire to with my music. She’s someone who understood what it took to sit at conception of pop as art, without watering anything down. ”