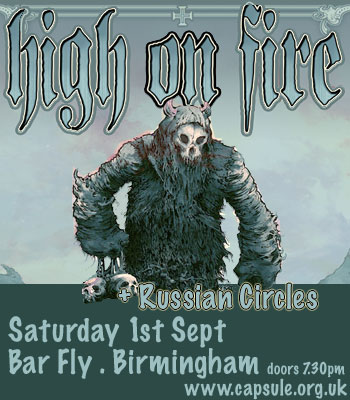 With a heavy-handed approach and a sound that crashes like thunder,
HIGH ON FIRE has put the power back in ‘power-trio.’ Less a band than a
supersonic exercise in conquest by volume and sheer heaviness, the band
has burned the metal rulebook and forged a new archetype.

HIGH
ON FIRE was formed by guitarist Matt Pike in late summer 1998; a scant
six months after the breakup of his previous band, the enigmatic
stoner-metal legend SLEEP. Formed out of the need to simply play guitar
again, Pike jammed with settled on a line-up of powerhouse drummer Des
Kensel and longtime guitarist friend George Rice, who made the switch
to bass to round out the trio.

HIGH ON FIRE are a supersonic
exercise in conquest by volume. Equal parts molten metal and earthquake
panic, HIGH ON FIRE’s MOTORHEAD-meets-SLAYER roar is outrageously loud
and absolutely punishing. With their latest release, “Blessed Black
Wings”, guitarist / vocalist Matt Pike (ex-SLEEP) unleashes a
devastating combination of bombastic guitar and howling war cries,
weaving fantastical tales of supernatural beasts, forgotten battles and
rivers of blood over an unstoppable bass and drum assault. HIGH ON FIRE
are a class unto themselves, manhandling rock music while locking into
grooves that transcend time.