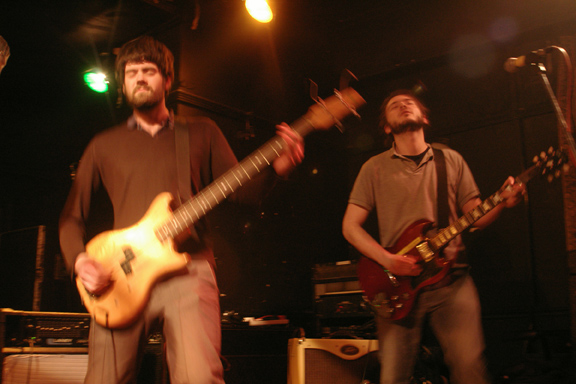 Chris Corsano – a kinetic DIY drummer [one of the world’s most exciting] – uses this project to inject some punk tabla-type rolls into being while Mike Flower – an incendiary guitar player – also plays the “shaahi baaja” or “japan banjo” from India in an amazing solo style and transcendent manner.

As a powerful and loud guitar/drum duo, Lightning Bolt comparisons come cheap, but the Flower-Corsano Duo are something else; more like a punk-jazz-trash Konono No1, they have that special power to elevate through noise, rhythm and special harmonies. This is an experience the audience wants to have, an exhilarating sight/sound that shudders the body and cleanses the mind.

Michael Flower is best known as a member of Leed’s Vibracathedral Orchestra, a lynchpin of the improvising rock/noise/drone world. He has also has played with legendary artists such as Tony Conrad and Jandek as well as in projects such as the trio with Matthew Bower + C. Spencer Yeh.
Vibracathedral’s close relationship with Sunburned Hand Of The Man has meant MF has toured with them across the USA and Europe, both as a member and solo.

Rick
Tomlinson, self taught jack of all musical trades has since drawn
influence from an oblique archive of obscure LPs and bizzare
instruments and forged his own unique approach to making music. A
potent cocktail of krautrock, folk, jazz, tropicalia and Welsh
progressive rock has seduced stalwarts of Manchester’s alternative
music scene into countless collaborations with Rick at the helm.
Brandishing a masala of instruments ranging from brass and acoustic to
electric varieties Rick has shared studio sessions with the likes of
Lone Pigeon, Jane Weaver, Badly Drawn Boy, Dave Tyack and Aidan Smith,
as well as stage time supporting Lincoln, James Yorkston, Turin Brakes
and David Kitt. Various impromptu appearances at local folk clubs have
earned Rick a bourgening reputation amongst hard core enthusiasts and
mainstays of the folk scene such as John Renbourne who recently asked
Rick to accompany him on future live appearances.

Mills & Boon
Infamous locals channeling the spirit of Beefheart, creating their
own ramshackle brand of rambling psych spazz folk.  They
always deliver a stunning live performance that bristles with a
chaotic excitement and a sense that anything could (and might)
happen, these are the wonderful drunks of times gone by,
instruments in hand entertaining anyone they encounter.
http://www.myspace.com/millsandboon