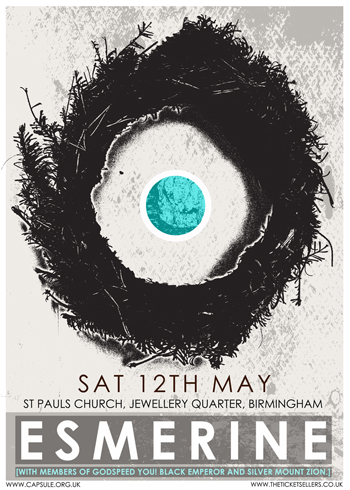 A very special show in a beautiful location – St Paul’s Church in the Jewellery Quarter area of Birmingham.

Esmerine was co-founded ten years ago by percussionist Bruce Cawdron (Godpseed You! Black Emperor) and cellist Rebecca Foon (Thee Silver Mt. Zion) soon after the duo met while recording the first Set Fire To Flames record, Sings Reign Rebuilder (2001) at the old brothel at 10 rue Ontario Est in Montreal. Esmerine has since released two critically-acclaimed albums of modern chamber music, If Only a Sweet Surrender to the Nights to Come Be True (2003) and Aurora (2005) that have one foot in the new music/experimental terrain of contemporaries like Rachel’s or Town And Country and the other in the more visceral and lyrical landscape populated by the likes of Dirty Three (and GY!BE themselves).

Hailing from Stourbridge near Birmingham, Adam Beckley uses field recordings and looped samples to create textures of sound, sometimes hypnotic noise, other times dreamy soundscapes.
Adam has released two tapes. The first called ‘Revere’ through the label ‘Carnage Club’. The second and most recent release is a split tape with Los Angeles based musician Beru. This was put out on Adam’s own tape label ‘Armed Within Movement’ and is the first release for the label. You can listen to both these releases on the links below.