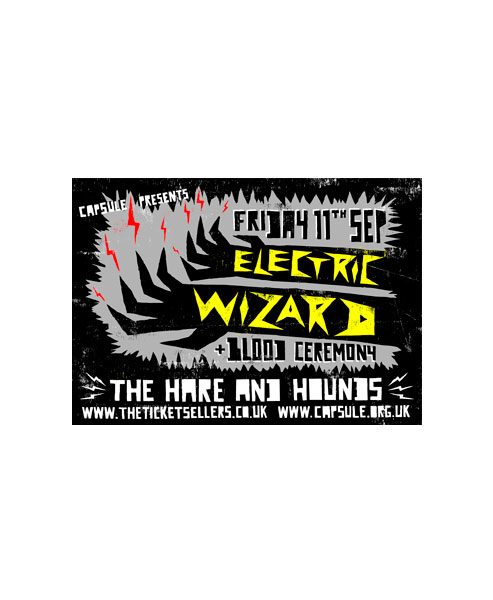 ELECTRIC WIZARD is the heaviest band in the world. The oblivion and ecstasy of crushing doom and high grade marijuana, a sonic aural trip far, far away from this world, where only cyclopean walls of crackling vintage valve amplifiers set to the full overdrive and primal ritualistic beats can wash away all the filth and drudgery of everyday life. Our music is DoomMetal, the only true definition. We toll the bell of hell, our sound is a crushing behemoth of funeral march psychedelia.
Violent, bleak and ritualistic, we bow to the black altar of the RIFF. We do not rock, we kill!

Born in Dorset, England in 1993, in a quiet country town, initially we were the product of frustration, unemployment and excessive drug abuse. But through hallucinogenic experimentation and occult sciences we realised our true potential. Eventually becoming a multi-tentacled paen to dark and weird subjects. A celebration of outre low brow art like Weird Tales, 70’s horror and B-movies, head shop art, drug comix, italian pornohorror comics, Crepax, Lovecraft, Howard etc. etc…coupled with a morbid fascination in cults, witchcraft, freemasonry, biker culture, nazi mysticism and ancient occult sciences and how these dark arts can be applied to music. We have created a true one way ticket away from this dead planet.
http://www.myspace.com/electricwizarddorsetdoom

Born out of an obsession with ’70s occult rock, Blood Ceremony’s music resurrects the spirit of groups such as Coven, Affinity, and Black Widow. After a mind-numbing study of hundreds of trashy witchcraft films, the group began to pour their energies into crafting songs, transforming their fascination for horror into a profane musical vision. Blood Ceremony is interested in musical sorcery, the members having made a firm pact dedicating themselves to the twilight world of saturnalia and occult lore.

Blood Ceremony plays a distinctive brand of flute-tinged witch rock. Early on, their sound revealed an infernal marriage of Black Sabbath and the manic piping of Jethro Tull. Eschewing the affectations of modern rock music, Blood Ceremony keeps it simple and heavy; yet their songs are tempered with strong, brooding melodies. This effect is enhanced by their use of the flute; an instrument once prevalent in progressive rock, but which is uncommon in today’s scene. Invoking the mischievous “Pipes of Pan,” Blood Ceremony songs are distinguished by singer Alia O’Brien’s energetic jazz-flute solos – accenting an instrument long-associated with a list of devilish mythic characters. Writing of Blood Ceremony’s situation in heavy music, NOW critic Jason Keller points out: “Once (the flute) enters the forum of heavy metal, there aren’t many other bands you can reference.” Although the tag of Heavy Metal may be a stretch, there is a sense of heaviness and funereal gloom in Blood Ceremony’s music, as well as a lyrical obsession with eldritch themes, that aligns them with much of traditional Doom.
http://www.myspace.com/bloodceremony