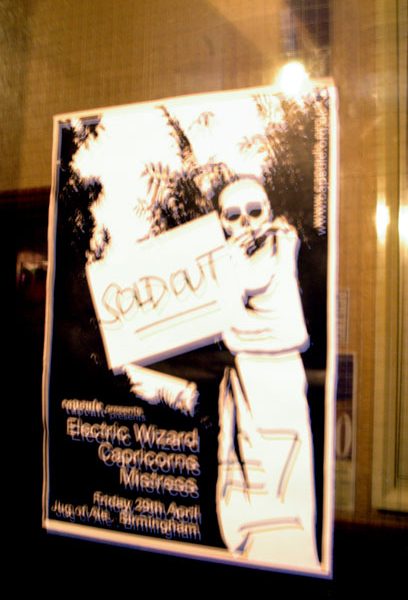 After several months of speculation & uncertainty, the longstanding recording artists, Electric Wizard are now ready to officially unveil a new line up & announce a tour.

Following the departure of former drummer Mark Greening (drums), the band recruited the punishing skills of former Iron Monkey drummer Justin Greaves to fill the position behind the kit.

Jus Oborn decided to recruit the services of a second guitarist, Liz Buckingham, who had previously played with legendary cult all girl New York Doom/Crust band 13 and more recently with Southern Lord recording artists Sourvein. Filling in the bass position is friend of the band Rob Al-Issa.

At last, an ensemble from the UK underground that is challenging, Fresh & invigorating; emerging from the granite wastes of London, England comes the towering behemoth known as Capricorns.

The recent history begins in early Spring2003 when Nathan Bennett & Kevin Williams (current members of renowned soundscape rock outfit Bridge & Tunnel) realised they were both desperately seeking a proper conduit for their surfeit metal influences. After a few brief writings sessions they felt they had enough basicmaterial to warrant enlisting their long time friends Dean Berry(formerly of Iron Monkey) on bass and Chris Turner (from Orange Goblin) behind the kit.

Formed in Birmingham during 1999, MISTRESS have released two albums to date Ñ “Mistress” and “The Chronovisor” Ñ to rave reviews and have gigged with the likes of NAPALM DEATH, MAYHEM, ELECTRIC WIZARD, BOLT THROWER and EXTREME NOISE TERROR. Their hard-to-pin-down sound comes across as a sickening sludge/grind/doom hybrid, reminsicent of the early U.K. grind scene of the late ’80s and early ’90s, and has been described as “a vile musical bastard, a bilious, screaming, snot-faced sludge orphan with all the taste and decorum of a sexual encounter in Wormwood Scrubbs.”