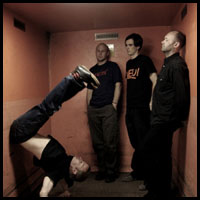 Members of Godflesh and Sally in a powered up shoegaze band. This is blissed out pop with nods to MBV, Mary Chain, as well as post rock flourishes and the odd bit of Sister era Sonic Youth. Nice intricate time changes with nods to 20th century composer Steve Reich but with a sense of urgency missing from most so called post rock bands.
www.myspace.com/einstellung