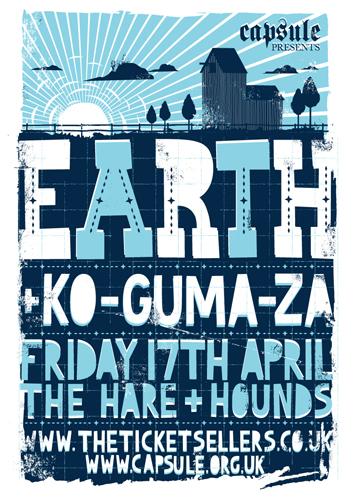 Earth are an American drone band based in Seattle, Washington, formed in 1990 by Dylan Carlson, Slim Moon, and Greg Babior; the band took its name from the first incarnation of Black Sabbath. Although they have played various styles of music, they are best known as pioneers of a minimalistic, long and repetitive form of heavy music known as drone. To a lesser extent their sound is referred to as doom metal. Earth, however, have little to do with metal in their current sound. Their early albums could be seen as a variation of the experimental doom-influenced metal of The Melvins.

Their music is beautiful and at the same time desolate featuring the sound of lonely highways, wide-open spaces and the occasional slide guitar. They are so far ahead of the pack it will take years for people to catch up with them. This is music to get totally immersed in; it’s melodic, powerful yet understated and reserved.
www.myspace.com/earthofficial

“Ko-Guma-za: “The little bear”. 3 piece KGZ sees the guitar section of Nottingham band Wolves Of Greece reunited for the first time since their involvement with NYC composer Glenn Branca’s orchestra in 2007 and 2008. Whereas the Wolves were designed to allow no time for audience reflection, this new project is a direct contrast. Dense guitar tones shape fragments of songs backed only by insistent, Mo Tucker-ish drum patterns. Melodies and harmonies reveal themselves slowly through the murk.”
www.myspace.com/oogamaza