Merch orders made on and before Wednesday 16th December will be delivered before Christmas.
Our office then closes for a Christmas break so orders received between 17th Dec - 11th Jan 2021 will be shipped out week comm. Monday 11th January.
Back to 2007 Line Up
Fri 13th July 2007
This is an archive item from Supersonic 2007 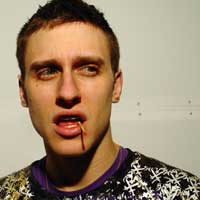 Drop The Lime
Born and raised in New York City, Drop the Lime (aka. L. Venezia), began recording music at an early age. Inspired by the local rave scene he had grown up in, Venezia bought a pair of turntables and began DJ’ing jungle, drum&bass, and Techno. Expect four to the floor bangers spiked with Grime and Growling Bass Techno, while he drops his soul styled vocals.
http://www.myspace.com/dropthelime