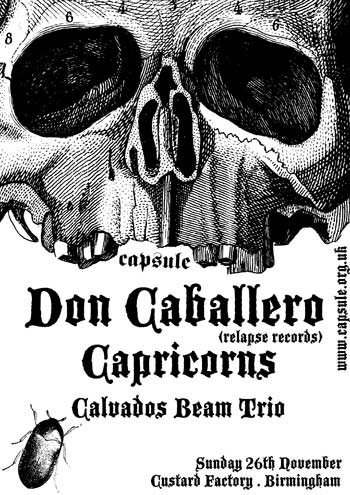 Don Caballero formed in Pittsburgh, PA in 1991 by drummer Damon Che, guitarist Mike Banfield and bassist Pat Morris. Individual veterans of the local scene, they had offers for gigs before they’d even found a lead singer, and simply wound up remaining instrumental. Their name was taken from an SCTV sketch in which the Joe Flaherty character Guy Caballero was a Mafia don. Through some personal contacts, the band got a chance to enter the studio with producer Steve Albini, who recommended them to Touch & Go Records. Don Caballero releases several singles on Touch & Go before completing their Steve Albini-produced debut, For Respect in 1993. Just prior to the recording of For Respect, Ian Williams joined Don Caballero as a second guitarist.

Pat Morris departed following its release, and was replaced by Matt Jencik for Don Caballero 2, a loud, ugly, intricate album that was released to rapturous reviews in 1995. Hailed as a math rock landmark in some quarters, 2 expanded the group’s audience by leaps and bounds. In its wake, several Caballero side projects sprang up: Che played guitar in another Pittsburgh band call Thee Speaking Canaries, who issued an album not long after; Williams, meanwhile, formed an experimental side project called Storm & Stress, which was most often based in Chicago. Matt Jencik soon left the group and went on to play with Hurl and Taking Pictures. Pat Morris returned to fill his original position and in 1998, this lineup released What Burns Never Returns after which Mike Banfield and Pat Morris both left the group. Morris’s spot was eventually filled by Storm & Stress bassist Eric Emm (aka Eric Ehm).

A compilation of Don Caballero’s early formative singles appeared in 1999, under the title Singles Breaking Up, Vol. 1 (a reference to The Buzzcocks’ Singles Going Steady). In 2000, the group issued its fourth proper album, the cleaner-sounding and more subdued American Don, which again won complimentary reviews. A year after the release of American Don, Williams and Emm left the fold leaving Che to discover what is now the current Don Caballero lineup. Also in that interim, Che continued to work with Thee Speaking Canaries, releasing ‘Get Out Alive: The Last Type Story’ on Scat in October of 2003.

Don Caballero prove once again that they are innovators of their craft and remain head and shoulders above their peers. The bands powerful, percussive-heavy sonic advance is more dense, more expansive and burns with a new-found urgency.

The London, England based behemoth known as Capricorns was
formed by four men in the latter half of 2003 currently or previously involved
in projects as disparate as Iron Monkey, Orange Goblin, Bridge and Tunnel, The
Dukes of Nothing…the list goes on.

While the original impetus never went much beyond “does it slay?”
the music has developed over the past two years into a heady mix of bone
crushing brutality and dark, subtle beauty that has won over fans of the heavy
arts worldwide.