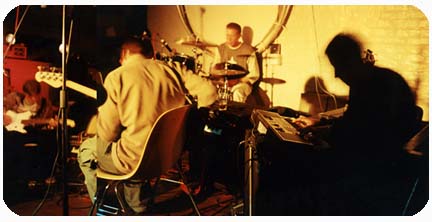 Sublimating their rock instincts through dub and lounge filters, they began to brew up a heady batch of psych-tinged instrumentals. Collaborations with fellow Toronto-area musicians Ohad Benchetrit (guitar, horns, keyboards) and Jason MacKenzie (drums, keyboards) led to the formation of a proper band, where the signature chill vibe, marked by syncopated rhythms and repeating melodies, took shape. Jason’s growing collection of old synths led him away from the drum kit and into full-time knob-twiddling, so drummer Dave Mitchell was added to the group in mid-1998.
Do Make Say Think are now a finely-calibrated musical Sputnik tracing stardust orbits around the good green Earth. Ultimately, Do Make Say Think remain very much a rock band, devoted to brash riffing and blissful repetition, but moving towards more sublime dynamics and harmonics.

“As that South Park film made mercilessly plain, Canada is not a nation usually associated with its momentous contribution to popular culture. Yet, along with fellow Canucks Godspeed…, Do Make Say Think are breaking the mould by producing some of the most exciting, truly innovative music of the moment. Managing to be both unsettling and deeply beautiful, genuinely experimental yet infinitely palatable, Goodbye Enemy Airship…rarely resorts to the tired quiet/loud Slint methodology that has contributed to post-rock being pilloried in some quarters. Instead, they inject squalls of jazzy horns into opener “When Day Chokes The Night”, employ a Ry Cooder-style country twang on “The Apartment Song” and recall Future Days-era Can on the gloriously woozy “All Of This Is True”. The lasting impression is of a band overflowing with a restless flow of ideas. Stunning. “
Pat Long Select Magazine April 2000

To find out more about Do Make Say Think:
www.cstrecords.com

EPIC45 come from the staffordshire area of england and formed at school during 1995. Founder members Ben Holton(guitars), Rob Glover (bass) and mark oldfield (drums) starting rehearsing together in that year but it wasn’t until around late 1997 that they started listening to bands like ‘Spiritualized’ and ‘Mogwai’ and with that came the realisation that you could make 10 minute noisy instrumentals and get away with it.

After sucessful gigs in the past supporting such acts as Muse,Cay,Do Make Say Think,Rothko and Twist, epic45 return with two additions to the band with Scott Massey (keyboards/guitars) and Matt Kelly (guitars/bass) brought in to enhance the sound experience.