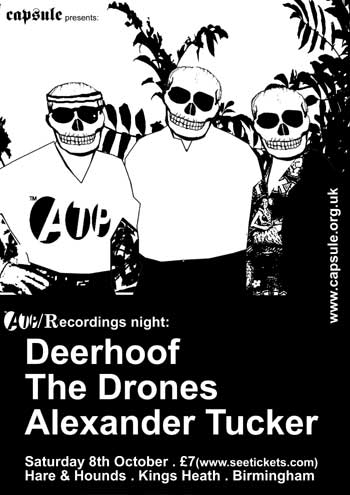 As unlikely as any band in recent memory to transcend outsider status
and garner glowing reviews from around the globe, Deerhoof may be about
to enter uncharted territory for such a steadfastly and delightfully
weird band. Completely throwing out the indie-rock rulebook, with the
lead vocalist writing and singing in fractured English and the
arrangements in a constant state of simultaneous evolution and
disintegration, the band has moved along its artistic progression in
fits and starts, slowly gravitating toward a more cohesive identity.
Still, that these musicians have been able to converge the most
improbable summit of high-concept art and pop accessibility – splitting
the difference between noise and melody, delirious immediacy and
off-putting abrasiveness – has to be considered one of the most
implausible developments of early 21st century indie rock. And now,
quite surprisingly, they’re being rewarded for it. No band since Sonic
Youth has been more capable of making otherwise difficult or esoteric
art seem like a mass consumer product. (Matt Fink, Delusions of
Adequacy)

Formed in Melbourne, The Drones are a magical but terrifying ride
toward the edge of danger… sometimes chaotic and stern, sometimes
melodic and joyful. Emerging as one of the best new bands in Australia,
the combination of Mike Noga (drums) Fiona Kitschin (bass) Gareth
Liddiard (vocals/guitar) Rui Pereira (guitar) have signed to
ATP/Recordings for the release of their album, ‘Wait Long By The River
and the Bodies of Your Enemies Will Float By’. This is the proof – well
and truly of one of the most intense and gifted bands in the world, on
stage and record. The distillation of Australian rock n roll history
condensed in one perfectly formed album.

Alexander Tucker has recently released Old Fog which illustrates his
use of field recordings and tape loops. This release is a delicate and
beautiful record that feels like a soundtrack to a winter evening,
evoking an eerie feeling that haunts listeners to seek more. His
commanding performance as a musician has lead to invitations to play
guest guitar slots with the likes of Jackie-O Motherfucker, Sunn 0)))
and Bardo Pond. His solo live shows are also a powerful document,
showing that playing alone with a 4 track can sometimes be more
effective than many live bands can offer. Throughout 2005 Alexander has
honed his craft well and supported Nina Nastasia, Olivia Tremor
Control, Fly Pan Am, Michael Gira’s Angels of Light and most recently
Dinosaur Jr.