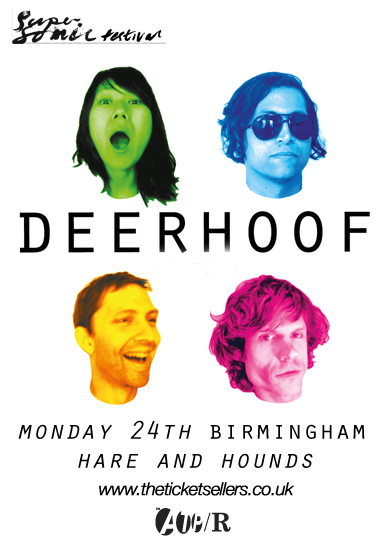 Satomi Matsuzaki plays bass and sings, Greg Saunier plays drums, John Dieterich and Ed Rodriguez play guitars. But what is Deerhoof really? Hell if we know. Pitchfork went so far as to label Deerhoof as “the best band in the world.” The New York Times described them as “one of the most original rock bands to have come along in the last decade.” From their humble beginnings as an obscure San Francisco noise act, they’ve become one of indie music’s most influential bands with their ecstatic and unruly take on pop.

Free School
Bringing the sunny Balearic sounds of summer and the icy kosmische sounds of winter to a venue near you, Free School are maximalist and minimalist all at once. But in a good way. The Birmingham duo signed to the internationally renowned Tirk label in 2011 and recently released their critically acclaimed LP ‘Tender Administration’, following two 12” EP releases and a string of remixes for the likes of Roots Manuva, Phil Oakey and Maps (Mute).

VICTOR are a Birmingham based noise quintet whose diverse influences blend to create a mash up of genres, creating a new sound that has something for every alternative pallet.

“Heavy grooves and dark noise give a beautiful backdrop to the reverb drenched power vocals that melodically dance around the room. Big choruses and dangerously boisterous breakdowns make VICTOR a band to keep your eye one and a band that definitely deserve a breakthrough into the public eye.” – Counteract Magazine
www.facebook.com/victortheverbose