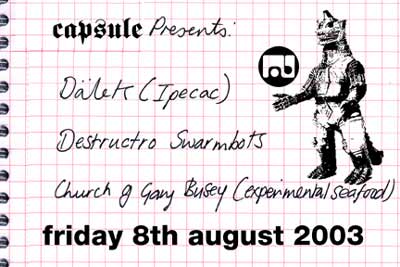 Event Details:
Stepping out from behind the dark, ugly shadow of contemporary Hip Hop, Newark, NJ’s Dälek are here to redefine pretenses of the genre now and forever with their challenging new full length on Ipecac Recordings.

By fall of ’98, the young group made yet another uncommon move in the Hip Hop world by committing themselves to a ceaseless, DIY touring ethic which they maintain to this day. It was on the road at a college show that the group met Still. He impressed them by jumping up during their sound check and improvising a 15 minute set on the turntables. While Dälek and the Oktopus are consistently pushing the limits and expectations of the sampler as a musical instrument, Still spends most of his time recreating how audiences hear turntables. Alternately pulling out old school cuts or making the turntable sound like a guitar, a violin, or a wall of white noise, Still aims to be equal parts Grandmaster Flash, Jimi Hendrix, and Merzbow rolled up into one tight afro. The group spent years since meeting Still on the road, captivating audiences across the board opening for such varied groups as Grandmaster Flash, De La Soul, EC8OR, Isis, Prince Paul, DJ Spooky, The Rye Coalition, Lovage, The Dillinger Escape Plan, Pharcyde, Techno Animal, Tomahawk, Funkstrong, and The Roots (to name a few). Not to mention their studio and on-stage collaborations with Avant-Garde Jazz artists like William Hooker and Ravish Momin, to electronic artists like Kid606, Velma, and the legendary Krautrock super-group Faust.

“Dark and intense, just like the great man himself” is probably what Ben would describe his latest musical project. The church of Gary Busey has been more likened to Detroit and Chicago house producers but with a passion for noise music and grindcore. Melting all these strange musical influences together ,to make experimental music that you can almost dance to is his goal.Creating music with strange techniques with tapes loops,guitars,feedback,drum machines and computers. With a new e.p due out on experimental seafood in the next few months and a series of live dates planed I think it will be a productive year for Mr Busey……and his church of course.
www.experimentalseafood.com