Due to the global health concerns related to Covid-19 our team is working from home.
We are very grateful to those of you that want to support us by buying merchandise but be aware that you may not receive your items for up to 14 days.
Back to 2008 Line Up
Fri 11th July 2008
This is an archive item from Supersonic 2008 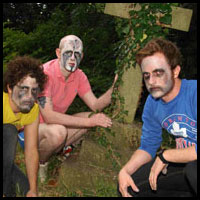 Cutting Pink With Knives
I put last year’s album in my top ten at work and cause I’m lazy this is what I said: ‘I am officially too old to listen to this record. It reminds me of hanging out in Red House Park as a kid, drinking MD 2020, smoking and generally being a bit of a nuisance. Musically it’s total spazzy Blood Brothers casio core. Snotty, noisy and with nursery rhyme vocals. Also some of it sounds like you played Killdozer at 45 rpm. We’re honored that this will be their final UK show before an amicable split.
www.myspace.com/cuttingpinkwithknives