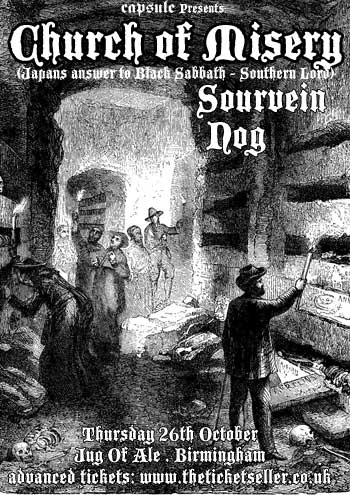 Sourvein came crawling into the East Coast / Southern
underground in
late 1992 with a single mission; to become one of the heaviest and
most
tour worn bands in America. Mission accomplished!

Inspired by heavy-weights like The Accused, Motorhead, Saint
Vitus,
Black Flag and early COC, Sourvein took the DIY approach with
their
vision and created a lurking monster of audible despair and a
word-of-mouth campaign that continues to build a cult-like
following.

“There’s something diseased about their sound; the tracks have
a
morbid sickness to them, and the gut reaction of good, decent folk
is
to stay the hell away.” – StonerRock.com

Nog, stupidly low-tuned eight string baritonal, polyrhythmic, instrumental disco metal. Inspired by such artists as Meshuggah and Whitney Houston. Guaranteed to make you bang your head clean off and/or dance like a broken robot. NOG are your new gods little boys.
http://www.myspace.com/nogulism