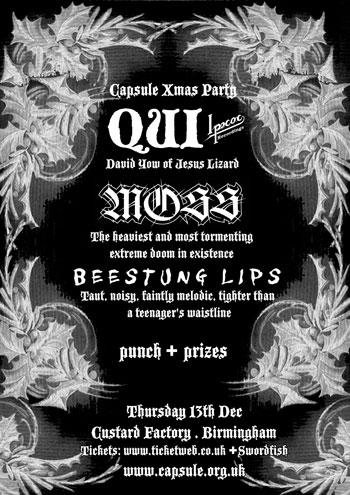 Qui – http://www.myspace.com/qui
The Los Angeles trio is Paul Christensen on drums, Matt Cronk on guitar, and David Yow, who joined the band last year, doing what he does best. If you’re a Scratch Acid or Jesus Lizard fan, Qui sounds like a grungier sampling of both, with a little psychedelic stoner rock thrown in.

Beestung Lips –  http://www.myspace.com/beestunglips1
Spewed up from the murky depths of Birmingham at some point in mid 2006, Bee Stung Lips is a four-headed hideous beast, with blood-shot eyes and tentacles stretching far back into the Midlands music scene.
Chewing on notes from The Jesus Lizard, Hot Snakes and Oxbow, and then spitting them back out, with additional nods to literary giants such as Charles Bukowski and John Fante, they create a provocative mixture of wilfully abrasive noise and viscera-shredding rock ?n? roll. Howling, anguished, and convulsive vocals tussle with rapid-fire drums, riotous guitar and blistering bass lines, before collapsing into a chaotic heap, breathless and foaming at the mouth.
Fiercely intelligent, yet unashamedly reckless, Bee Stung Lips possess an irrepressible addictive fury along with an abundance of technical aplomb. Rapidly garnering a sizeable reputation for their infamous live performances, they are currently rampaging across the UK in a whirlwind of chaos, phlegm, and bare flesh.

Bound by hatred, disgust and despair, MOSS create the heaviest and most tormenting extreme doom in existence. An expression of horrific bleakness and mind-numbing desolation through otherworldly odes to madness, H.P.Lovecraft, and altered states.  Despite the use of extreme bass frequencies, Moss features no bass guitarist. They are on Aurora Borealis Records