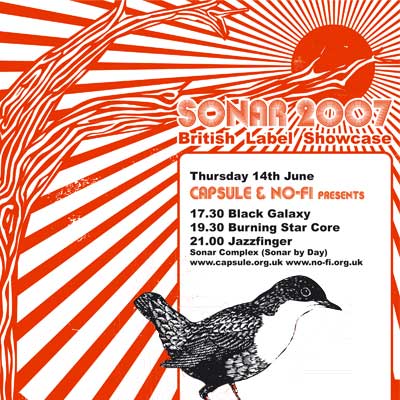 Capsule are once again co-ordinating a trip to Sonar Festival in Barcelona. We have a showcase in collaboration with Newcastle based No-Fi, and a stall under the Supersonic banner at the record and media fair, representing a selection of the Midlands finest creatives including Warm Circuit, Outcrowd Collective, Night Times, SYZYGY, We’re Still Alive, Monium, Katie Connor, Ben Neal, Prime Objective and Rob Horrocks. The stall is located on the 2nd floor at the CCCB and will be next to the British musicc stand (also co-ordinated by Capsule) and features Futuresonic from Manchester , NoFi from Newcastle, Inky Mole, Factory Road, Bathysphere from Leicester and Bad Timing from Cambridge.

Black Galaxy
Formed in 2003, this shifting ensemble (including members of Sand and one of the founders of Napalm Death) explores electro-acoustic improvisation through real-time signal processing, home-built instruments and extended techniques. Shards of bass and séance beats merge with digital ghost fog and glacial electronic modulations to create shadow-inflected soundfields.
http://www.monium.org.uk/

Jazzfinger
Drenching the north of England in subterranean drones since 1996,
Jazzfinger are currently receiving attention for their minimalist
methodology and maximal aural outcomes. Sat cross-legged, backs to the
audience in reverence to their bank of Marshalls, Hasan Gaylani &
Ben Jones use the lowest of lo-fidelity tools: pick-ups on cheap
guitars, bows, dictaphones, an old gong, older cymbals, walkie talkies
and tapes all merge into a subsonic sludge of mass hypnosis. Finally
ears are opening and many labels including Rebis, Curor, Cut Hands,
Heavy Tapes, Gold Soundz, Mallard Lake, Seed and Beta-Lactam Ring are
giving their recordings belated shelf space with around 20 releases
over the last couple of years, with plenty more to come. Gaylani &
Jones have also performed in early versions of Matthew Bower’s Sunroof!
& Hototogisu outfits.
http://www.myspace.com/jazzfinger