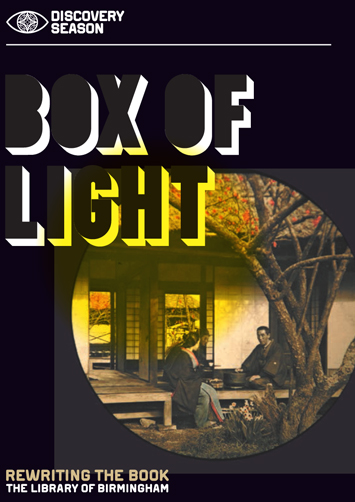 Before the days of film, the magic lantern was an important source of entertainment, using glass slides to create moving images and visual tricks. Birmingham played a key role in this pre-cinema world, producing thousands of lanterns for export, leading to the birth of the flipbook, and eventually the cinema. The Library boasts a hefty archive of 60,000 lantern slides, and to coincide with the Magic Lantern society’s annual conference in Birmingham, Flatpack Festival presents Box of Light, a weekend full of events, workshops and activities celebrating early cinema.

Box of Light Variety Show / 25 October /  7.30 – 9.30pm / £8
An evening of edification and entertainment featuring acclaimed performer Professor Heard, who will provide a whistlestop history of lantern shows and explain how they helped pave the way for cinema. This is followed by the Physioscope, a Victorian experiment with light and mirrors recreated for the first time in a century by Roderick MacLachlan, and the finale of the show is provided by French artist Julien Maire, whose Open Core performance includes a live dissection of a video projector.

Projecteo /  26 October / 1.30PM / FREE (bookable)
Designer Benjamin Redford will be giving a talk about his ingenious miniature slide projector which has proved to be an online sensation and a big hit on Kickstarter. In response to modern technology and the craze for Instagram, Benjamin has created a tiny projector to share Instagram pictures called the ‘Projecteo’. This analogue approach works by creating wheels of slide film to hold up to 9 images, which can be watched and enjoyed as a slideshow.

Mirror Mirror Lantern Workshops / 26 & 27 October / FREE (drop in)
Mirror Mirror will host an array of free family workshops, where visitors will have the chance to create their own lantern slides and experiment with colour projection. Established in 2009, Mirror Mirror Education are an artistic duo united by their mutual love of early cinema and a passion for theatre, the pair work together to run workshops, events and learning activities for participants of all ages and abilities.
Box of Light’s weekend is set to include more talks and activities and a comprehensive walking tour of key locations in Birmingham’s pre-cinema history.