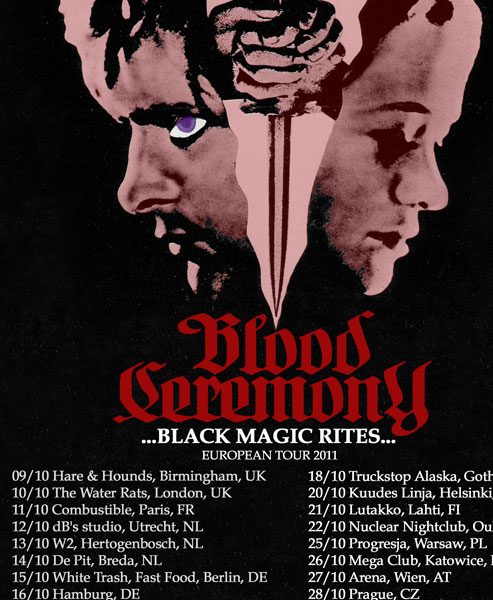 Blood Ceremony’s distinct style of flute-tinged witch rock evolves from an infernal marriage of occult inspired acid folk and vintage hard rock riffing.  After a mind-numbing study of hundreds of witchcraft themed films, the group began to pour their energies into crafting songs, transforming their fascination for horror into a profane musical vision.

A celebration of Euro-horror, ’60s saturnalia and occult miscellanea, their self-titled debut album was mixed by Billy Anderson and released by Rise Above Records in 2008. Following this they completed a successful European tour alongside Brit doom legends Electric Wizard.

Blood Ceremony finished recording their second album ‘Living With The Ancients’, working alongside producer Sanford Parker in Chicago. The album displays a definite improvement in songwriting skills and a strong musical maturity. Wider influences from obscure areas can be heard fluctuating beyond the more obvious comparisons associated their aforementioned 2008 debut.

Altogether more experimental, their ultra-heavy guitar rock owes more to the psychedelic world of Sonic Youth and Mudhonev than anything intrinsically metal. This is the ultimate in head music, cupping your brain and lifting it into the clouds before dragging it down an alley and kicking the crap out of it. C-Earth is a heavy and oppressive pressure wave. Heavy and hypnotic. Billy Anderson’s production drenches everything in a nice layer of mud, which suits the grimy, semi-liquid nature of the sound perfectly.