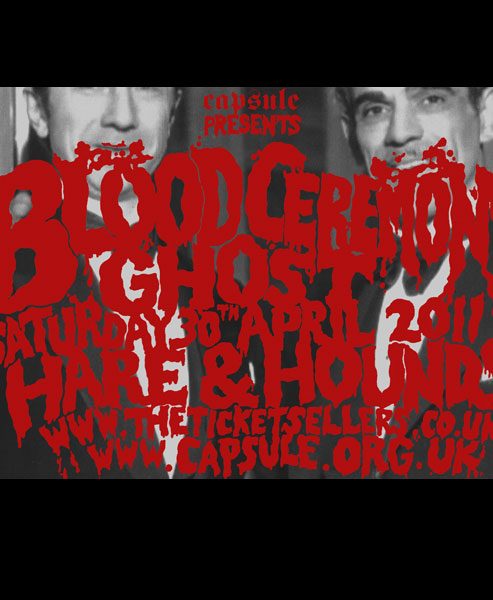 CANCELLED – We’re very sorry to announce that this event has been cancelled, here is the statement from Elastic Artists –

“We are extremely sorry to announce that we have been forced to cancel
Blood Ceremony in Birmingham and the rest of the band’s scheduled UK
dates.This is due to a conflict in schedule with Ghost who had been due to
tour as a package with Blood Ceremony. We have tried everything we
possibly could to keep the shows on but unfortunately it has not been
possible owing to the complex logistics involved. Blood Ceremony will
be returning to the UK in the Summer of 2011”

But keep the date in your diary as we’re planning a Capsule party of some great Brum bands – you can’t hold back the grannies!

Born out of an obsession with ’70s occult rock, Blood Ceremony’s music resurrects the spirit of groups such as Coven, Affinity, and Black Widow. After a mind-numbing study of hundreds of trashy witchcraft films, the group began to pour their energies into crafting songs, transforming their fascination for horror into a profane musical vision. Blood Ceremony is interested in musical sorcery, the members having made a firm pact dedicating themselves to the twilight world of saturnalia and occult lore.

Blood Ceremony plays a distinctive brand of flute-tinged witch rock. Early on, their sound revealed an infernal marriage of Black Sabbath and the manic piping of Jethro Tull. Eschewing the affectations of modern rock music, Blood Ceremony keeps it simple and heavy; yet their songs are tempered with strong, brooding melodies. This effect is enhanced by their use of the flute; an instrument once prevalent in progressive rock, but which is uncommon in today’s scene. Invoking the mischievous “Pipes of Pan,” Blood Ceremony songs are distinguished by singer Alia O’Brien’s energetic jazz-flute solos – accenting an instrument long-associated with a list of devilish mythic characters. Writing of Blood Ceremony’s situation in heavy music, NOW critic Jason Keller points out: “Once (the flute) enters the forum of heavy metal, there aren’t many other bands you can reference.” Although the tag of Heavy Metal may be a stretch, there is a sense of heaviness and funereal gloom in Blood Ceremony’s music, as well as a lyrical obsession with eldritch themes, that aligns them with much of traditional Doom.
http://www.myspace.com/bloodceremony

Ghost is the name of a devil worshipping ministry that – in order to spread their unholy gospels and, furthermore, trick mankind into believing that the end is ultimately a good thing – have decided to use the ever so popular rock music medium as a way to achieve their ends.

Standing motionless and anonymous beneath the painted faces, hoods and robes which their sect demand, the six nameless ghouls of Ghost deliver litanies of sexually pulsating heavy rock music and romantic lyrics, which glorify and glamorise the disgusting and sacrilegious, with the simple intention to communicate a message of pure evil via the most effective device they can find: Entertainment. This is Black Metal at its most original and deceiving; compositions such as “Ritual” and “Death Knell” majestically weave their melodic spell of evil through the senses until the listener finds themselves utterly possessed and open to any diabolical suggestion.
http://www.myspace.com/thebandghost