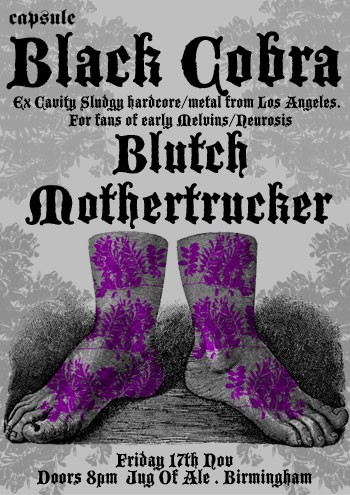 Black Cobra features Ex-Cavity and 16 members. They continue the short songs, the slow grindcore that have made their bands hidden legends. In recent years this strain of metal, which takes Black Sabbath’s “Sweet Leaf” as a sonic starting point and slows it down, has proven to be one of the more inspired and intelligent (sic) of the tired old genre.
Their  sound  is best described as monstrous ! To deliver a sound as brutal and gutwrenching with only two people is just beyond belief. Sludgy hardcore/metal from Los Angeles.  For fans of the early Melvins albums, Neurosis, Today is the Day and Helmet.

Drawing influences from a wide range of bands like Black
Sabbath, Kyuss, Mogwai, Tool, Slint, Red Sparowes, Pelican &
Isis the instrumental four piece aim to build upon their
contemporaries earlier works and create a meaty slab of music they
can call their own.