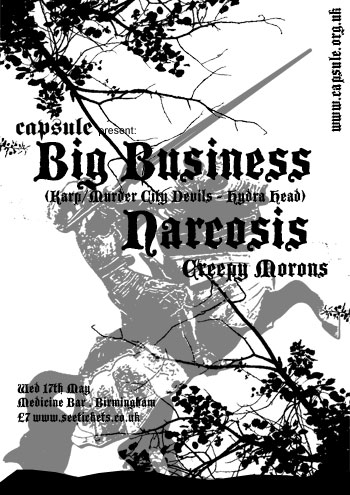 If, after getting drunk on cheap whiskey you stumbled onto a
highway, an earthquake started, and then you were struck by an
oncoming eighteen wheeler, you might be able to understand the
massive force, chaos, and rock and roll mayhem behind Big
Business’s debut full-length Head For The Shallow.

Big Business is a two-piece hardcore-influenced rock act from
Seattle featuring Jared Warren of Karp and the Whip on bass and
vocals and Coady Willis of Murder City Devils on drums. The two
combine a heavy, sludgy, and rumbling bass tone with tenacious and
violent drumming to create a furious and exciting rock band. Think
Drive Like Jehu if they stripped down their sound to just bass and
drums and listened to nothing but 70’s hard rock and 80’s
metal.
http://www.bigbigbusiness.com/