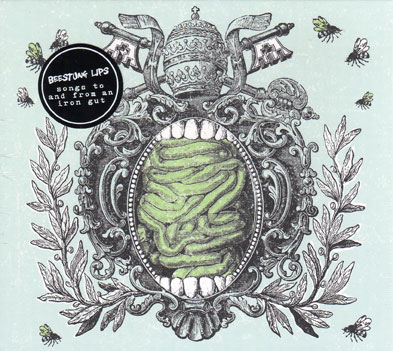 The 8th of October  will see our first release on Capsule Records, and we’re really excited that Beestung Lips have decided to help us set in motion the first of what we hope will  be a multitude  top notch recordings .

Spewed up from the murky depths of Birmingham at some point in mid 2006, Bee Stung Lips is a four-headed hideous beast, with blood-shot eyes and tentacles stretching far back into the Midlands music scene.
Chewing on notes from The Jesus Lizard, Hot Snakes and Oxbow, and then spitting them back out, with additional nods to literary giants such as Charles Bukowski and John Fante, they create a provocative mixture of wilfully abrasive noise and viscera-shredding rock ‘n’ roll. Howling, anguished, and convulsive vocals tussle with rapid-fire drums, riotous guitar and blistering bass lines, before collapsing into a chaotic heap, breathless and foaming at the mouth.
Fiercely intelligent, yet unashamedly reckless, Bee Stung Lips possess an irrepressible addictive fury along with an abundance of technical aplomb. Rapidly garnering a sizeable reputation for their infamous live performances, they are currently rampaging across the UK in a whirlwind of chaos, phlegm, and bare flesh.
“taut, noisy, faintly melodic, tighter than a teenager’s waistline. Young and energetic”www.musicomh.com

“this Birmingham foursome hold no bars as they convulse and thrash around on stage like a rampaging beast, foaming at the mouth and spitting into the crowd. Their eyes are rolling, the sweat is pouring, they’re rocking back and forth: they’re possessed. It’s an unadulterated and unrelenting assault on your ear drums, with thrashing guitars, hammering drums and a screaming vocal “
myvillage.com

“Ever fantasised about an unrepentantly vicious punk band fronted by a bloke who – with his preposterous ‘tache, white vest and braces – looks a bit like Freddie Mercury playing a Prohibition-era gangster and who launches stringy globs of spit skywards when he’s not emptying every last bit of air from his lungs into a microphone? BEESTUNG LIPS may just be for you. Memorably describing themselves on their MySpace page as “the wet spot in your bed and in your brain”, they’re even more in-your-face than Wolf Eyes – and that’s some achievement. The Capsule girls not only believe in them enough to put them on, but have also (in conjunction with Southern Records) put out their album Songs To And From An Iron Gut. You certainly need an iron gut to withstand the punch they pack. -” silentwordsspeakloudest.blogspot.com

You can buy now from our online shop:
http://capsule.bigcartel.com/
and are distributed by Southern
http://www.southern.com