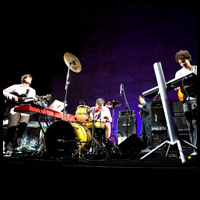 When they first played Supersonic in 2005 people were excited; mainly because of one EP and the pedigree of earlier bands these chaps had been in. That afternoon they blew people away with a crushing set that stayed just the right side of improv and became the talk of the festival. One critically acclaimed album later they are now the toast of the town. Live is where these guys excel, Stanier’s drums alone can stove your head in, combine that with the finest musicianship and a desire to make you think, as well as dance, and Battles could well be the most perfect band to headline Supersonic.
www.myspace.com/battlestheband