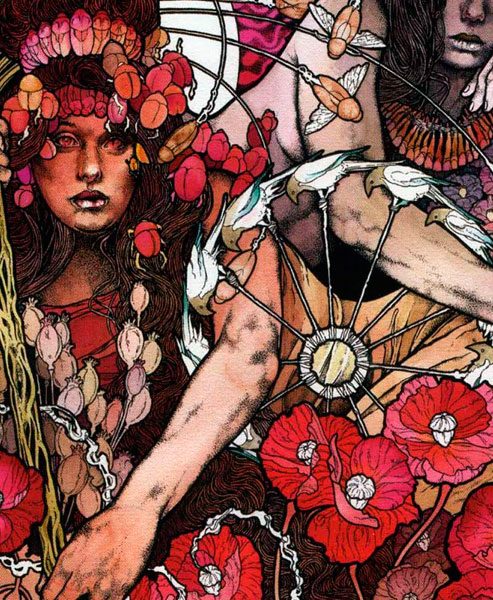 Savannah, Georgia’s Baroness blow the lid off their cauldron of hall of fame riffs on their first record for Relapse and debut full-length titled Red Album. With a sound built upon a resolute sense of purpose and shaped by hundreds of explosive live shows, Baroness position themselves at the forefront of heavy music with an epic album that is at once powerful, expressive, confident, and commanding. Red Album sees the band expand its sonic vision; colossal riffs and haunting vocals roll like thunder across epic songs spanning both the intense and the sublime. As the Red Album proves, Baroness’ formidable reputation proceeds them for a reason.
http://www.myspace.com/yourbaroness

Since this Savannah, Georgia quintet first formed in early 2001, worrying about genre limitations has never been a priority. Taking musical chances, however, always has been. While KYLESA are as heavy as any band out there, they are beholden to no one scene and no preconceived notions of what heavy music should be.
http://www.myspace.com/kylesa

Taint
Taint Of South Wales are something of an enigma. Many have striven to place their sound within a handy genre definition, only to find themselves wondering whether a band so dynamic and full of surprises can really be called ‘sludge’, or whether music so antithetical to boredom can justifiably be termed ‘post-hardcore’. Taint’s 2005 full-length debut for Rise Above, ‘The Ruin Of Nova Roma’ was a crafty beast that revelled in contructing such riddles for the listener and, of course, the critic. Pigeonholes are for pigeons, after all. It’s the purpose of great rock groups to not quite fit in.
http://www.myspace.com/taintuk