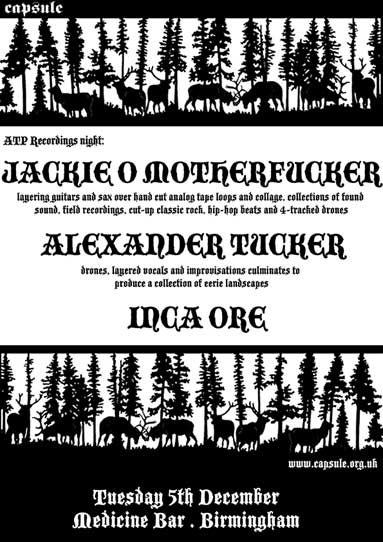 The first live performances featured an amplified reel to reel tape machine and electric guitar while additions of live percussion, 8-track tapes, alto sax, and a turntable filled out the sound. Many of the performances of this time were done to provide a live musical score for shadow puppet theatre.

Alexander Tucker began as the vocalist in post-rock hardcore 5-piece ‘Unhome’ who released one album “A Short History of Houses” (Unlabel) and a split single with Papa M. Unhome split in late 1999 and Tucker went on to tour with Detroit space-rockers ‘Fuxa’. Simultaneously, Tucker had been developing his interest in improvisation using detuned guitars, tape loops, mini disc player and fx pedals. In early 2000 Tucker recorded a solo self-titled album of acoustic finger-picking, experimental electronics, field recordings and spooked vocals, which was picked up by Tom Greenwood of Jackie-O-Motherfucker and released under his U-Sound Archives label.

His commanding live performance has led to collaborations which include working with Stephen O’Malley (SunnO))), Khanate) on his Ginnungagap side project (Southern Records limited Latitudes series), providing the soundtrack to Lali Chetwynd’s performance piece at Tate Britain and playing
as a part of JOMF, Duke Garwood, and Little Wet Horse.

Alexander Tucker is also a visual artist, creating artwork for all of his album covers and side projects, including ongoing drawings and comic artwork for ‘Sturgeon White Moss’ (White Moss Press) and the new cover for Nordic doom-master Wolfmangler'(Aurora Borealis).