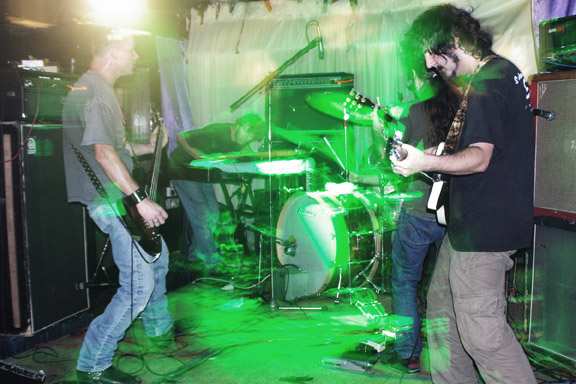 Asva is blowing through
town and taking the drone rock medium to new lows. Not your average
“doom” band, Asva’s saddlebags are filled with wooden chapel organs
and subharmonic drones. Their packs are stuffed with
electroacoustic sensibilities and hand-scribbled laments to the
alchemical stars – they rode through walls of electrostatic fuzz to
toll the mission bell on this side of the firmament – then they
smashed your piano to splinters just for the sound it makes. In
their wake nothing remains but tumbleweeds and twisters, dancing
pointlessly in ageless dusty darkness. Lead by former members of
SUNN 0))) and Burning Witch, the band features members of Secret
Chiefs 3, the Master Musicians of Bukkake, and Black Horse. Added
to the line-up of Asva was Trey Spruance (Secret Chiefs 3 / Mr.
Bungle) on guitar.


Formed in Birmingham during 1999, MISTRESS have released two albums
to date  “Mistress” and “The Chronovisor”  to rave
reviews and have gigged with the likes of NAPALM DEATH, MAYHEM,
ELECTRIC WIZARD, BOLT THROWER and EXTREME NOISE TERROR. Their
hard-to-pin-down sound comes across as a sickening
sludge/grind/doom hybrid, reminsicent of the early U.K. grind scene
of the late ’80s and early ’90s, and has been described as “a vile
musical bastard, a bilious, screaming, snot-faced sludge orphan
with all the taste and decorum of a sexual encounter in Wormwood
Scrubbs.”

Atavist formed in May/June 2004 in Manchester UK. We have got
Jamie “Boggy” Sykes Ex Burning Witch / Thorrs Hammer on drums. We
had one demo release ltd to #250 called 31:38 and have done tours
with SUNN O))), Ramesses, Esoteric, 5ives CRP, Unearthly Trance,
Moss, Indesinence, the end, transmission 0…. We have a self
titled album coming out in late 2005 via INVADA records (gonga,
ramesses, the heads) who are owned by members of portishead.
http://www.atavist.co.uk/atavist.html