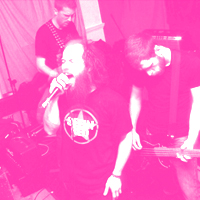 Playing live once again after an 18-month hiatus before they get too geographically scattered, AOFR sound is playing hide and seek with established styles, marrying hardcore hypervelocity, metallic discordance and hidden melodies. After close to a decade of DIY splits 7”s, 10”s and a single masterly album (2007’s “Life Is Cheap” on Superfi/Feast of Tentacles), and numerous UK and European tours (with Daughters and Taint among others) AOFR is still the UK underground’s best kept secret.
www.myspace.com/armyofflyingrobots