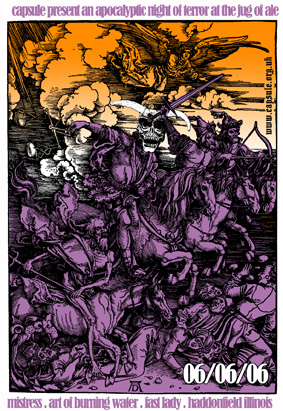 MISTRESS
Formed in Birmingham during 1999, MISTRESS have released two albums
to date  “Mistress” and “The Chronovisor”  to rave
reviews and have gigged with the likes of NAPALM DEATH, MAYHEM,
ELECTRIC WIZARD, BOLT THROWER and EXTREME NOISE TERROR. Their
hard-to-pin-down sound comes across as a sickening
sludge/grind/doom hybrid, reminsicent of the early U.K. grind scene
of the late ’80s and early ’90s, and has been described as “a vile
musical bastard, a bilious, screaming, snot-faced sludge orphan
with all the taste and decorum of a sexual encounter in Wormwood
Scrubbs.”

FAST LADY
“Is this the real life? Or is this just fantasy?” harked words
transcribed by the late great Freddie Mercury. His emotion drenched
in reverb and operatic in it’s execution. How could he have known
then that aside from the hedonistic pleasure trove that was the
seventies that in the next century we would remiss those words and
regret that we were not his friend or crusted bed toy.We now find
ourselves 6 years into a century of throw away pop stars and in
desperate need of some musical lidament substantial enough to stem
the flow of emotion from the arrow gauged corporate wound that
punctured our rock hearts.If thirsty then drink from our cup and if
weary lay your head upon our laps.

HADDONFIELD ILLINOIS
Have you ever wondered what a band comprised of the bastard
offspring of John Carpenter and born into the heavy metal Mecca
that is Birmingham would sound like? The answer would be this,
clearly influenced by 70’s Italian zombie films they take the 3
chord punk ethos of yesteryear and apply it to synthesizers,
electro beats and layers of noise to create a strain of mutant
electronic
doom.
www.myspace.com/haddonfieldillinois

“Those who have understanding reckon the number of the
beast. For it is
a human number…” and in this case, the number is 06/06/06.
To rightly celebrate this most satanic of dates, Capsule have
enlisted local
grind-sludge-punk scumbags Mistress to head up an evening of bands
doing
the devils work exclusively. With main support from terrifyingly
heavy
Londoners Art Of Burning Water. Further proof that the devil
definitely has the
monopoly on the best tunes.