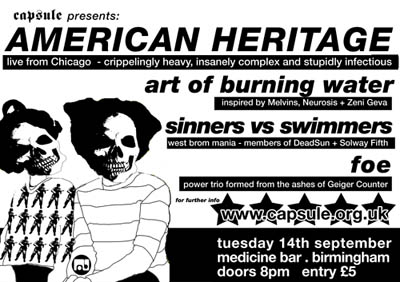 American Heritage – www.americanfuckingheritage.com
Formed in Chicago during the spring on 1997 by Adam Norden, American Heritage were an instrumental group trying to challenge traditional song writing styles and structures without being lumped in the over used “Art Rock” bracket. In no time AH became one of chicagos most original, respected and triumphant underground bands. Crippelingly heavy, insanely complex and stupidly infectious they seamlessly bound unconventional riffing with pure brute force. Recently AH have opted for an even heavier sound and have added vocals to the mix, something they always wanted but couldnt before figure out how to encorporate.

Foe – www.foemusic.co.uk
London based power trio formed in November 2001 after the split of mathrock band Geiger Counter. This previous incarnation had already cut itself a sizeable niche in the underground artrock scene after support slots with the likes of Tortoise, June of 44 and Sweet The Leg Johnny. They also had a record produced by Bob Western of Shellac. Foe’s formation was born out of a strong desire by it’s members to broaden their already complex songwriting style with new levels of mental endurance. They set about wirting the most dark and warped instrumental pieces of music they could, discovering and honing their sound as they went. They are known for mystifying their audiences with their cold and intricate song structures.

Art Of Burning Water – www.artofburningwater.co.uk
Their influences are eclectic and their sound has been influenced and inspired by, Iraqi and Irish folk music, Killing Joke, Swans, Palastine, Melvins, Neurosis, Zeni Geva, Rush and The Who. They are complicated progressive (not Prog) rock – mathy and heavy and doomy. “Absolutely disregarding the book entitled ‘How to write a catchy song’ and instead divulging the ‘How to baffle, confuse and intrigue’ notebook instead. … tight, dynamic and original with good sound. Art of Burning Water aren’t heavy, they aren’t even amazingly technical, but they are damn intelligent musicians, throwing in weird idea after odd moment, polyrhythmic as well, just to mess with the mind some more. For those who like their sludge, and their math-rock, and their odd chaotic metal and Neurosis-esque bands, this will appeal all round. This is clever music from disjointed, intricate people, for clever people who like disjointed, intricate music.”