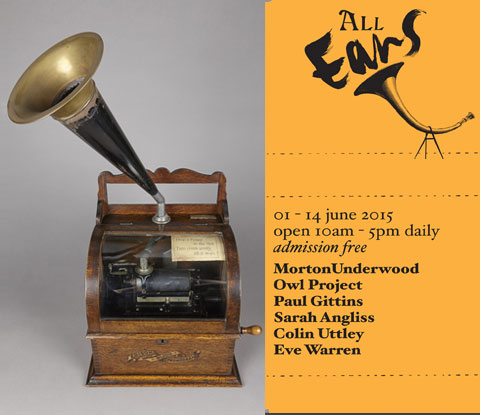 The mechanisation of sound creation began as soon as technology allowed it. In the 19th century, mechanical musical instruments such as barrel organs, symphonions, orchestrions, euterpeons and miniature music boxes proliferated. Equally marvelled at and loathed for their tinny, repetitive reproductions of classical pieces and show-tunes, these programmable machines can be seen as the ancestors of today’s electronic and digital instruments. Birmingham Museums’ collection of ornately decorated mechanical instruments, on display in the All Ears exhibition, reflects on the transition of music from real-time, human generated sound to the myriad ways in which technology shapes how we produce and consume music today.

Owl Project are combining ideas from the Symphonium music boxes in the museum collection, with more experimental techniques of optical sound developed in Russia during the early 20th century, such as the Variaphone and the ANS Synthesiser.

The Symphonium was very fixed in its musical remit. The notes were set to a Western scale and the sequences on metal disks, which were hard to change. In response, we are developing an unfolding music box that can be reconfigured in a multitude of ways. Assembled from a bespoke kit of paper discs, synth modules, motors and fixings, the Optikit will generate endlessly changing beats and rhythms throughout Supersonic Festival.

Owl Project is a collaborative group of artists, Simon Blackmore, Antony Hall and Steve Symons. Drawing on influences such as 70’s synthesiser culture, DIY woodworking and current digital crafts, they work with wood and electronics to create music making machines, interfaces and objects.

This five-octave pipe organ has been designed as an automatic party instrument. People can call up tunes by placing RFID-tagged request cards on the lid. The pipes come from two scrapped Welsh chapel organs. They’ve been stripped, rewaxed and regilded, then arranged in an asymmetric sweep that’s reflected in the shape of the new windchest (the box of air under the pipes). The paintwork is inspired by an 18th century harpsichord cabinet but uses soundwaves as a decorative motif. The air inlet, for example, is cut in the shape of a wavefront.

Sarah Angliss is an award winning composer, roboticist and historian of sound whose music reflects her fascination with European folklore and long-forgotten machines. In performance, Sarah mixes theremin, saw and ancient instruments with live electronics, with an ensemble of musical automata of her own design and construction.

Amplification is a stereo acoustic amplification system, developed to encourage deep listening to environmental sounds within a space. Users of the system can augment their listening through two large ear trumpets. They will also be able to adjust the stereo field of what they can hear by swivelling each horn.

MortonUnderwood is a musical instrument design and sound art duo made up of equal parts David Morton and Sam Underwood. to amplify the sound output Their work mainly explores acoustic systems and sub-bass.

A collection of instruments and objects played by clock motors. Oak apples, attached to the secondhand, hit the strings at two second intervals and then strike and fall back. Each instrument has several clock motors, positioned to select specific notes. This selection then repeats to create an endless rhythm. The structure of intervals between the notes is essentially random, producing an infinite number of variations, and the clock motors can be switched on and off using a bluetooth control, changing the shape of the rhythm. The instruments produce a continual stream of minimal music with a two second beat.

Paul Gittins works with a variety of media, producing interactive shadow shows with screens of paper pixels, in theatres and outdoor festivals. He is currently developing an orchestra of self playing instruments that will be attached to trees in woodland locations.

All Ears is a Millennium Point Trust commission, curated by Capsule and delivered in partnership with Birmingham Museums Trust. The exhibition is supported using public funding by the National Lottery through Arts Council England.