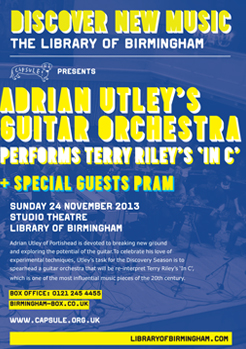 Adrian Utley is devoted to breaking new ground and exploring the potential of the guitar. As a member of the experimental electronic band, Portishead, Utley is jazz trained, with a passion for the minimalist approach to playing. To celebrate his love of experimental techniques, Utley’s task for the Discovery Season is to spearhead a guitar orchestra that will be re-interpret Terry Riley’s ‘In C’, which although written in 1964, is one of the most influential music pieces of the 20th century.

The audience will witness fifty three different ways of the playing the C note which will form an unforgettable performance, supported by organ music and percussionists. To commemoratethis unique concert, Invada Records will release a recorded live version in the Autumn of 2013.