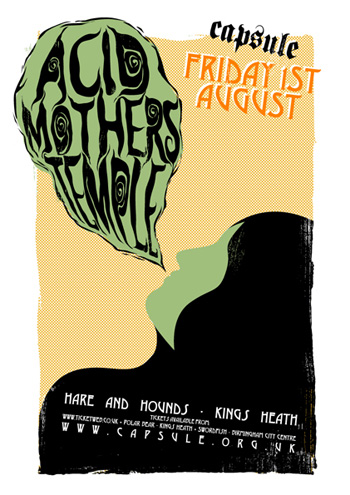 Japanese psychedelic band founded in 1995 by members of the Acid Mothers Temple soul-collective. The band is led by guitarist Kawabata Makoto and early in their career featured many musicians but by 2004 the line-up had coalesced with 4 core members and frequent vocal guests.

The band have a reputation for phenomenal live shows and releasing frequent albums on a number of international record labels, as well as the Acid Mothers Temple family record label which was established in 1998 to document the activities of the whole collective.
http://www.myspace.com/acidmotherstemple

Nisennenmondai (Smalltown Supersound / Japan)
Imagine an insane birthday party with Sun City Girls, Keiji Haino and Mika Miko all invited, things are gonna go volcanic, and that’s where Nisennenmondai come in! Of all the noisy girl groups of Kansai, Tokyo’s Nisennenmondai – their name translates as ‘Year 2000 problem’, a reference to the millenial computer bug – honestly! – are at once the most intense and hypnotic band to run out of the scene. Himeno Sayaka (drums), Zaikawa Yuri (bass) and Takada Masako (guitar) met, of all places, at the same after school music club at university in Tokyo and quickly jumped into band formation, self-releasing two EPs with short shrift before touring Japan alongside the likes of Death Sentence: Panda!, OOIOO, Lightning Bolt, Hella, Oshiri Penpenz, and Afrirampo. Their pulsing rhythm section and metallic overtoned guitar sound something like a heathen and tranced-out amalgamation of Boredoms, Neu!, Ruins and Leopard Leg – apt comparisons considering their group ensemble ethic and circular pattern performance setup. Nisennenmondai are as thrilling as they convulsive. Now don’t forget to blow out the candles!
www.myspace.com/nisennenmondai