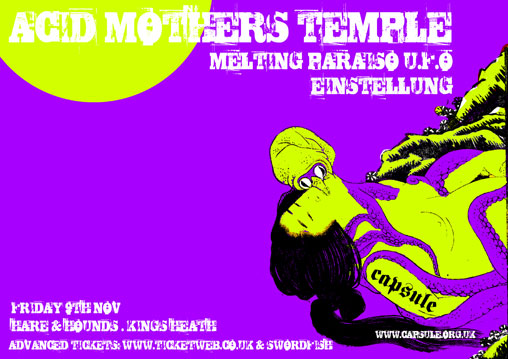 Acid Mothers Temple & the Melting Paraiso U.F.O. (and subsequent offshoots) is a Japanese psychedelic band founded in 1995 by members of the Acid Mothers Temple soul-collective. The band is led by guitarist Kawabata Makoto and early in their career featured many musicians but by 2004 the line-up had coalesced with 4 core members and frequent vocal guests.

The band have a reputation for phenomenal live shows and releasing frequent albums on a number of international record labels, as well as the Acid Mothers Temple family record label which was established in 1998 to document the activities of the whole collective.

Einstellung’s sound is one of mesmerising power and hypnotic beauty. They are part krautrock and part psychedelic indie noise-pop – with a touch of the heavy metal heritage of Birmingham, their home city. Einstellung’s “powerkraut” sound is the product of a meeting of minds between guitarists Andy Smart & Andrew Parker (ex Sally/Katastrophy Wife) with Si Rider (ex Grover) drums and Steve Hough (ex Cable Regime/Godflesh) on bass.

Einstellung’s appeal is an unhurried approach and use of tension/release. Songs teeter then finally explode into electric walls of overdrive. Despite a lack of vocals Einstellung’s shows are captivating and extremely loud. The band clearly relishes the noise they produce together, their enthusiasm and energy cascades from the stage.  Live shows are infrequent – catch them at every available opportunity.