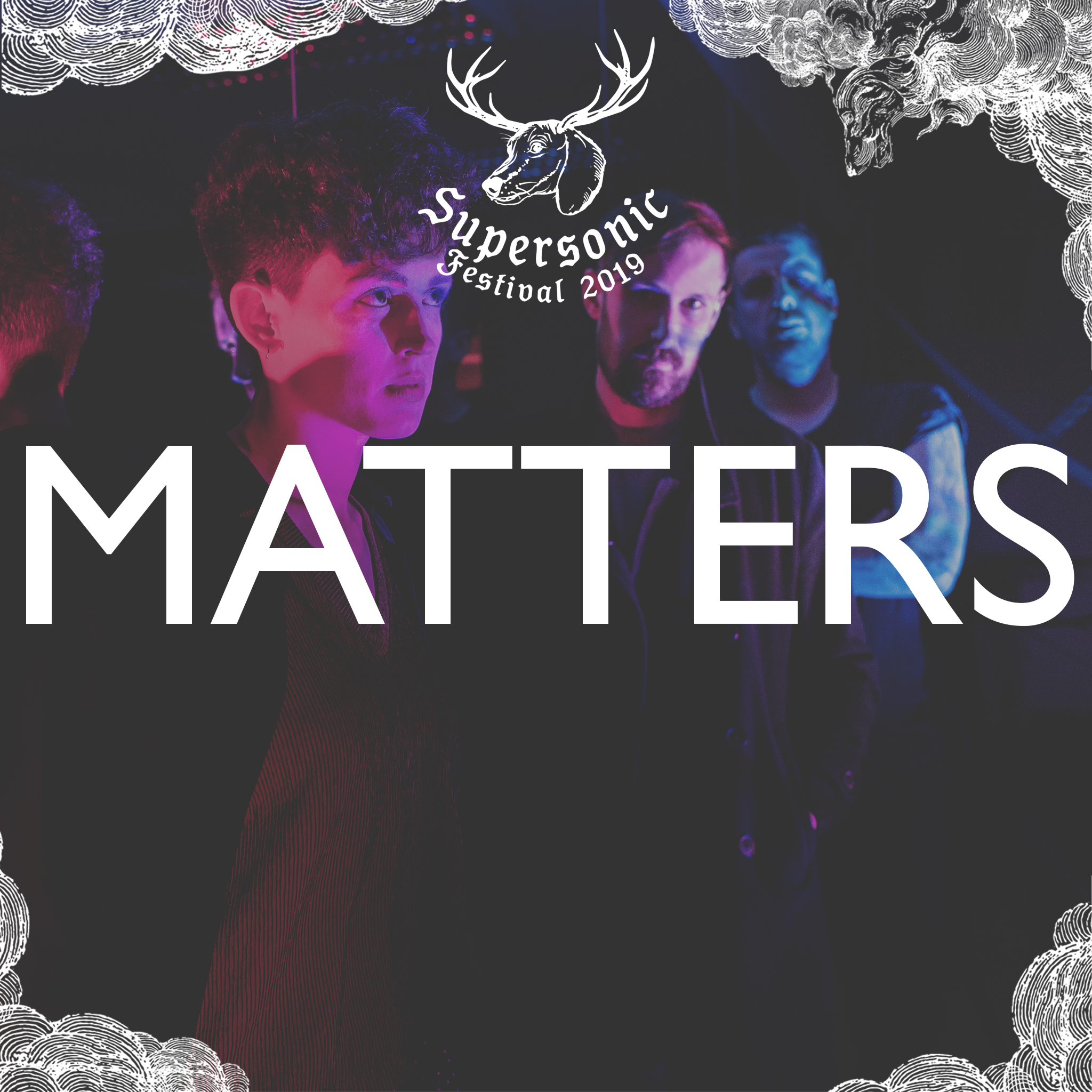 Local Brummie band Matters won over the Supersonic crowd at 2018’s end of year party. Their storming set of pulsating synths, heavy beats and cinematic vision is something to behold, so much so – we’ve invited them to perform at Supersonic Saturday this year – and they’ll be cranking it up a notch or 2! A set not to be missed at Supersonic Festival 2019 from one of Birmingham’s most talked about new bands. DAY TICKETS STILL AVAILABLE!

In light of their BRAND NEW VIDEO RELEASE this week for single ‘Mauveine C’, a track taken from forthcoming release ‘The Square’ out soon on Static Caravan Records, we decided to send the band some questions so you could all get to know them a little better.

What Matters to you?

What doesn’t Matter to you?

Why did you become Matters?

Stuart wanted to do something that had fewer boundaries than the music he’d been involved with before, Brid had always had an interest in synths and the technology around that. Tom joined us late last year, he’s great with electronic drums as well as being an actual real drummer. He also brings our combined height up to 551cm. We do almost everything ourselves and it’s a very open space to incorporate lots of creativity.

How does the name relate to the music?

In a way it sort of feels like a blank canvas, like there is lots of space around it.

You create beautiful films for your music, all in-house. You’ve just released ‘Mauveine C’ this week featuring members of other Birmingham bands both in the music & visuals. Can you tell us about this track, the video and collaboration?

Our label wanted to put out something small before we went into the next thing. We had a track left over from the debut record, so we thought it would be interesting to tackle some re-imagining/reworkings of the older stuff to put out with it. We had wanted to do something with Hoopla Blue for a while, and they didn’t feel like just an obvious choice. We share some common ground, but we are very different from each other musically. The result was Mauveine C, which is a reworking of our track Mauveine. It’s the only thing we have that uses a vocal. They did a wonderful job, and we felt like it deserved a video. The video features two members of Hoopla, alongside Beth from the excellent Dorcha. The video for Mauveine C is about perception and the difference between one person’s version of reality to the next. That, and how life is too finite to spend it arguing over who’s reality is the right reality.

You like cats. Which of your tracks do you think cats would most enjoy and why?

I think it really depends on the cat. One of our cats loves a good analogue oscillator, she probably prefers the Square for those. Our other cat won’t listen to anything slower than 236 bpm, so we’re a bit lost on him. There’s a dead sexy cat over the road I saw carrying a whole rat in her mouth once, she’s always out at night, I believe Mauviene is in her hunting playlist..

We cant wait for your Supersonic performance. What can our audience expect?

The music we’re writing now feels much darker than before so that’s where the performance is headed, we won’t be playing anything that we currently have out. Visually, we did a few shows last year with some large patterned light boxes we made, they were a bit Memphis inspired, but we’ll be tearing it all apart in the next few months and rebuilding it into something that suits the new stuff more. We know a bit more about how it all works now, so hopefully can push the technology a bit harder. It’s obviously not practical to do this at all our shows so it’s gonna be a treat for us (and hopefully the audience too).

Who are you looking forward to at Supersonic?

Moor Mother. The Bug. Jerusalem in my heart. Dalek. But mostly hearing something good we haven’t heard before.