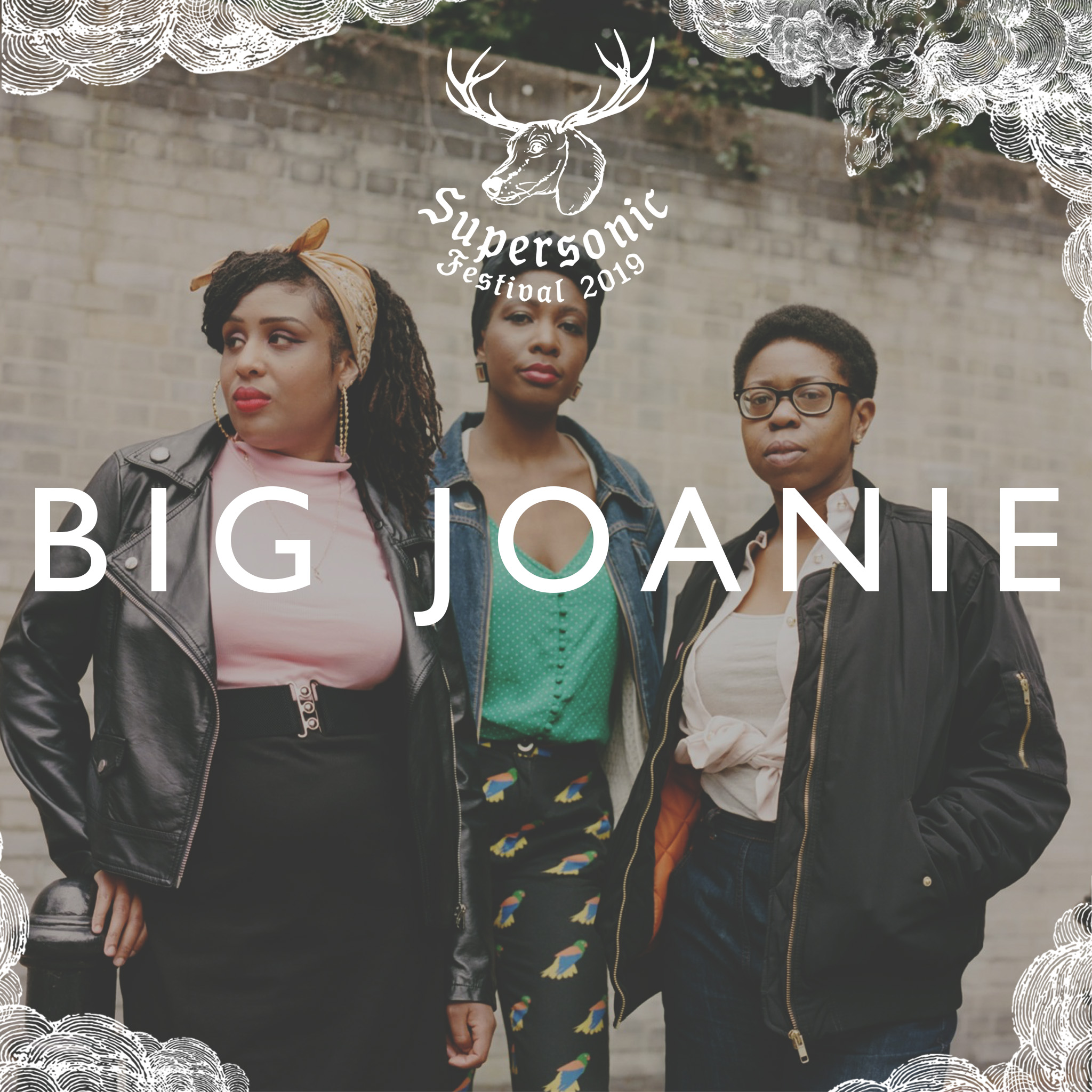 Big Joanie are Stephanie Phillips (singer/guitarist), Estella Adeyeri (bass) and Chardine Taylor-Stone (drums). They formed the band in 2013 as part of London’s thriving DIY punk scene. Big Joanie have played with locals Shopping; toured with US punks Downtown Boys; and Dutch Punk band The Ex; and performed at the first UK Afropunk festival.

With their sound inspired by that of The Ronettes, Nirvana, Breeders and Jesus and Mary Chain, Big Joanie have described themselves as being “similar to The Ronettes filtered through ’80s DIY and Riot Grrrl with a sprinkling of dashikis.”

This London-based group has self-released three rough-hewn EPs on their own imprint, Sistah Punk, each one featuring songs that blend tangling post-punk guitar lines, spit-shined hooks, and a “sprinkling,” Chardine says, of black liberation politics.

Big Joanie recorded their debut album ‘Sistahs’ over several sessions from November 2017 to January 2018 at Hermitage Works Studio with producer Margo Broom. One of the main reasons for coming together as a band was to create an atmosphere to be “completely ourselves as black women and discover what was possible to realise in those spaces.”

The album cover features Steph’s mum Joan, whom the band is named after, and her aunt on holiday in Wales. The album title derives from the band’s belief in sisterhood and female friendship.

“Women of colour have always had a place in punk.

Big Joanie is here to remind you of that.”

Outside of the band, all three members are also involved in communitarian activities…

Steph is a journalist writing incisively about music and politics, but despite a serene focus and a deep, assured singing voice she admits to a natural reserve, explaining that she lived vicariously through the riot grrrl music she devoured as a teenager in the middle England town of Wolverhampton. “As a very shy person, I loved hearing someone else stand up for themselves,” she tells The Fader.

A couple of hours away across the Midlands, the outgoing, quick-to-laugh Chardine grew up nurturing a love for Nirvana in Kettering, the town “where all the fucking government parties do their research for middle England.” Chardine is a prominent activist and the founder of London’s Stop Rainbow Racism Campaign, which aims to get rid of racist performances from LGBTQ spaces.

In London, bassist Estella Adeyeri teaches guitar to young girls, explaining how she was listening to British alternative radio station XFM — “back when it wasn’t just blokey music,”.

Part of their motivation for being visible is to make sure that punks of colour don’t feel, as Steph puts it, like the “odd one out.” As an antidote to this, they all work together on London’s Decolonize Fest — a music festival by and for POC punks, held at the central axis for their home city’s punk community, DIY Space For London.

In this Tedx talk, Chardine discusses how coming from a working-class background, rather than through university, prompted her journey towards becoming a Black feminist. She discusses her obsession with alternative music and how the DIY mantra of punk subcultures can inform activism and help forge a radical identity for Black women today…

Bold, catchy and arresting, Big Joanie make powerful music whilst creating a continuum for Black punks by presenting strong, powerful visions of Black womanhood and talking about the Black punks who came before them. Catch them at Supersonic Festival 2019.