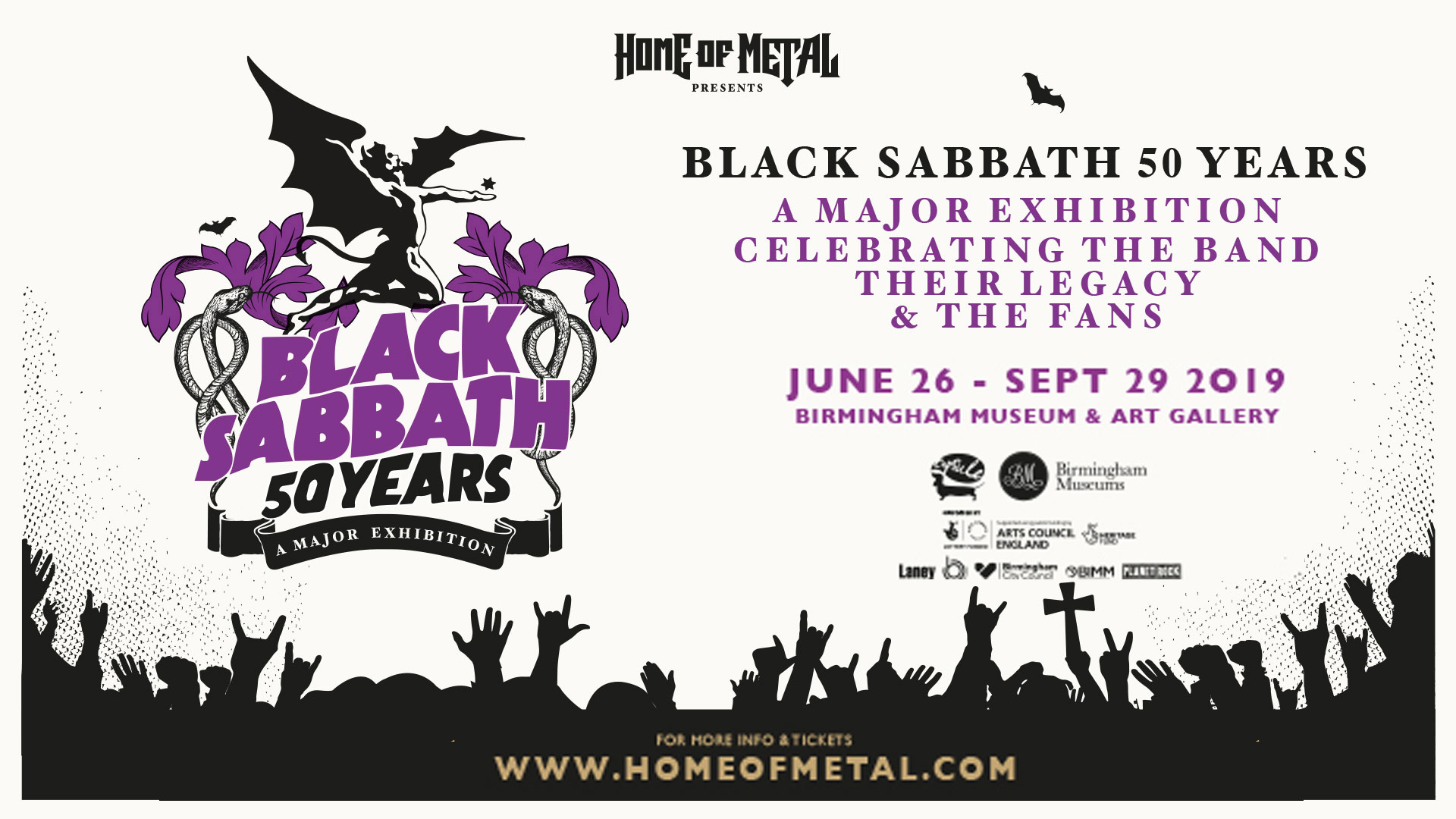 “It’s an honour to be a part of the Home of Metal. I am just a guy from Birmingham who’s been blessed to have had such dedicated fans throughout my career. Like I’ve always said ‘I am nothing without them’.” Ozzy Osbourne

As part of this years Supersonic Festival we are also running in parallel a major season of exhibitions and events Home of Metal devoted to the music that was born in and around Birmingham. Music that turned up the volume, down-tuned the guitars, and introduced a whole new meaning to the word ‘heavy’. With a blockbuster exhibition Black Sabbath 50 Years at Birmingham Museum & Art Gallery.

We have blocked off 3 exclusive time slots for people visiting Birmingham for the weekend of the festival to get tickets for this exhibition. You can access these using the code ‘Supersonic’ for Friday / Saturday / Sunday

The exhibition celebrates Black Sabbath from the perspective of their fans, to show the impact and cultural legacy of the band as pioneers of Heavy Metal, and to celebrate this unique, significant part of British music heritage.

From the humble beginnings of 1960s Aston, Birmingham, Ozzy Osbourne, Tony Iommi, Geezer Butler and Bill Ward created Black Sabbath, in turn forging a new sound, a new aesthetic, and a new musical culture – Heavy Metal. They’ve sold more than 75 million albums worldwide, ranked by MTV as the ‘Greatest Metal Band’ of all time and listed by Rolling Stone Magazine in their ‘100 greatest artists of all time. This year Black Sabbath will receive a Lifetime Achievement Awards at the Grammys. 50 years later Home of Metal celebrates the band, their impact on music and their dedicated global following.

“Fans are our lifeblood, they’ve always been there to support us.” Tony Iommi

This immersive exhibition will feature historical photos, ephemera, and memorabilia sourced directly from all of the original Black Sabbath members. Including personal stories that will demonstrate the extraordinary scale and diversity of Black Sabbath’s international fan-base together with a vast photography collection of over 3,000 portraits of fans from all corners of the globe. 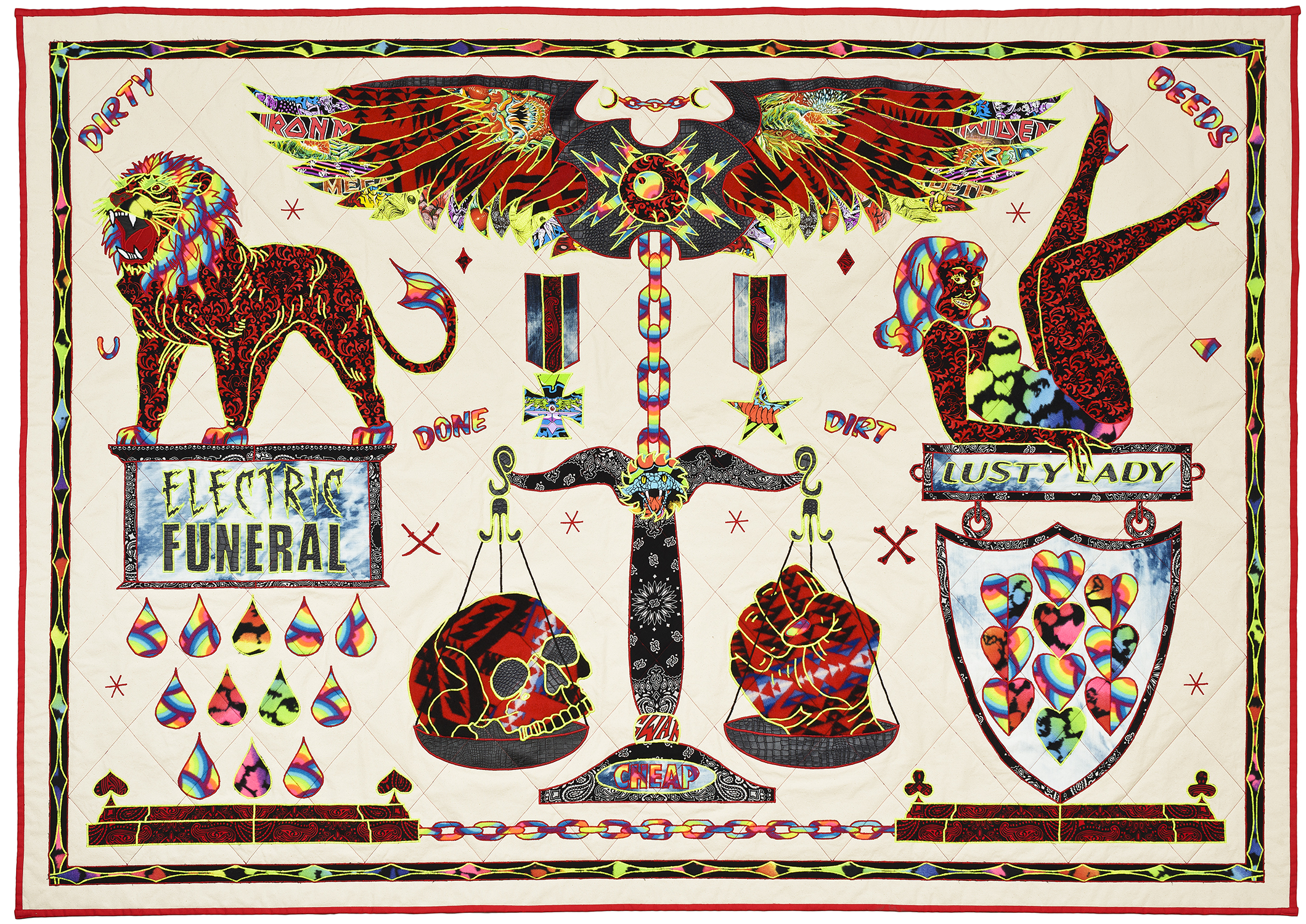 Read about the whole season via www.homeofmetal.com

Home of Metal Free exhibitions include:

All This Mayhem at MAC (Midlands Art Centre),presents US artist Ben Venom using traditional quilting and Heavy Metal aesthetics to create textile based pieces which contrasts the counterculture components of gangs, punk/metal music and the occult with the comforts of domesticity.

Hand of Doom at MAC (Midlands Art Centre), the exhibition features a collection of portraits of Black Sabbath fans wearing the ubiquitous battle jacket. The jackets are embellished, handmade and embroidered by the fans themselves, and worn to tell the story of their fandom and gig-attending history.

Monster Chetwynd: Hell Mouth 3 at Eastside Projects, Chetwynd’s fascination with Penelope Spheeri’s three-part film series The Decline of Western Civilisation (1981 to 1998), featuring many of the ‘most influential and innovative musicians and groups of all time’, has informed many of Chetwynd’s works over the past decade and will take centre stage in this large- scale sculptural and performative spectacle set within this industrial space in the heart of Birmingham.

Przemek Branas at Centrala,  Branas, an award-winning and acclaimed Polish artists, will present two exhibitions and a programme of talks and events in response to the theme: Home of Metal. An archival and research based exhibition will feature materials, such as letters, cassette tapes and zines, collected by Polish fans and received by them from the West, at a time the Polish music scene was under state control.