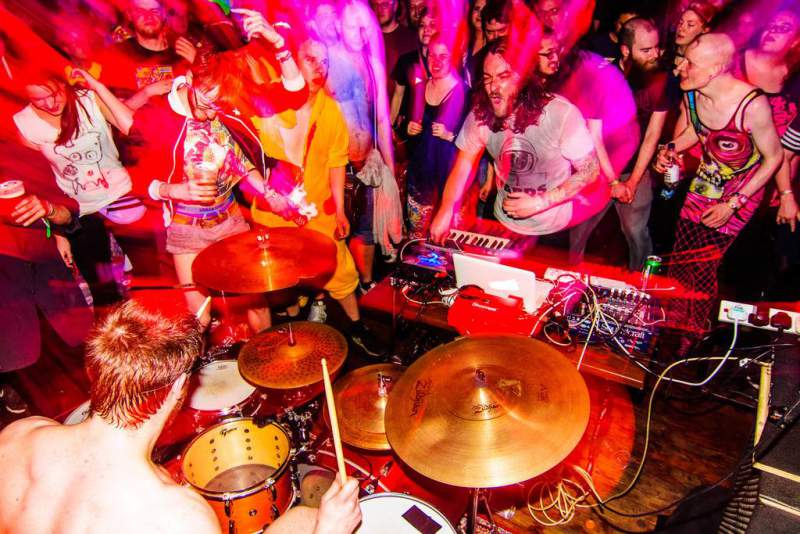 BIG LAD is a two-headed trigger-synth-party-noise machine made up of Henri Grimes (ex Sheild Your Eyes) on drums and Wayne Adams (ex Death Pedals) on synths.

This duo are renowned and cherished as an unforgettable live experience having played extensively in the UK’s exceptionally healthy and thriving underground scene. They’re as comfortable trashing people’s necks at sweaty basement punk shows as they are melting gurning faces at raves such as Bangface and are now becoming a staple on many UK and European festival stages every year.

“A mind-expanding kaleidoscope of live and manipulated sounds –

a brutal culmination of breakcore, noise rock and post-hardcore”

“Are you ready? Let’s play!” exclaims the strangely menacing toy sample which opens up BIG LAD’s new record… and play they certainly do, may God help you if you’re not ready for the off warp speed-drumming ala Lightning Bolt, twists and turns with Venetian Snares and Aphex Twin style synth and gizmo sonic warfare. This isn’t a record to soundtrack a picnic.

‘Pro Rock’ is the second album from the band, their first being 2015’s ‘Big Lad’ record which was released under the moniker Shitwife. They then decided to rename the band BIG LAD, to confuse the crap out of everyone, which it did.

“I usually just come up with hooks and riffs etc.

and we then both start to put them together as recorded songs,

then from there, we work out how the hell to play it all live.”

Last year at Supersonic 2018, Big Lad Wayne joined Gum Takes Tooth for the Moog Sound Lab as part of a residency hosted by the Royal Birmingham Conservatoire. It sounded a little like this…

These pair have a sound that is purely relentless. We can’t wait for them to bring the punk/metal/noise rock/whatevercore electronic-hybrid party to Supersonic 2019!

“They play right in the middle of the crowd. It’s maxed out, exhilarating stuff, which given them the ability to sneak onto pretty much any line up, from a grindcore night all the way to a warehouse rave.”