We’ve just about landed back down to Earth after a weekend of other worldly encounters at Tusk Festival. 3 days encapsulated within what could well be described as a giant dimension shifting vehicle, fallen to our planet to suckle at the south bank of the River Tyne for a mere millennia until it is time to take flight once more in the continuum of time and space. The perfect setting perhaps, to be rattled and probed, chewed up and spat back out, via noise makers, visual stimulators, and time travellers from far and wide. After a delirious 6 hour drive, we entered the void… 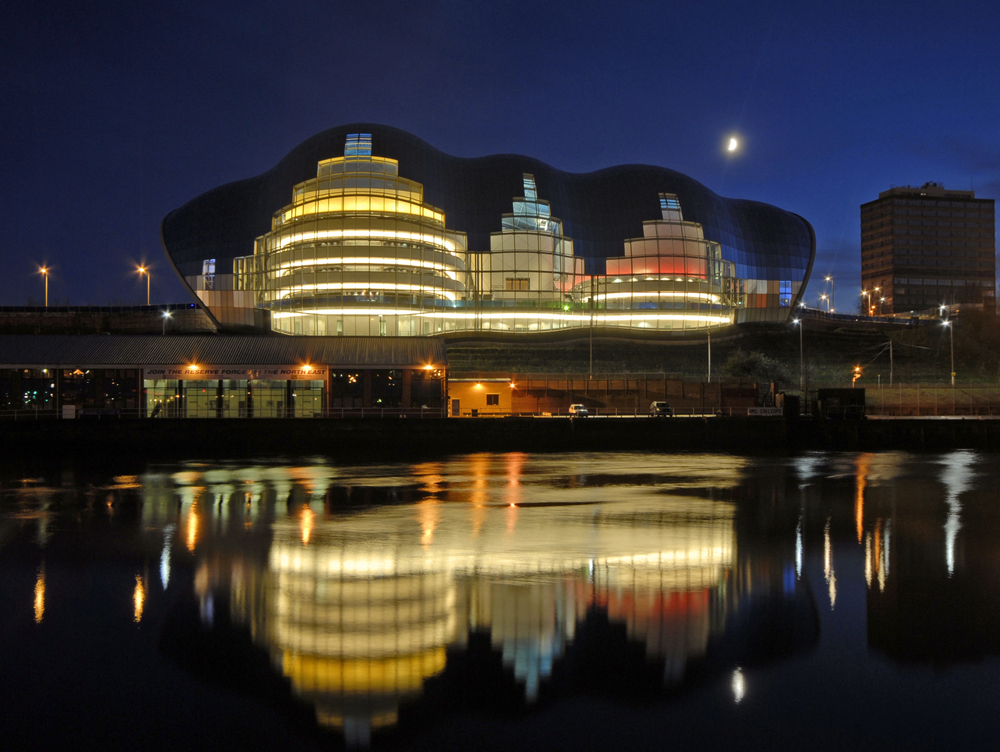 Sadly missing the first 2 acts due to M1 madness, we entered the phantasmagoric world of Lucy Railton. Having previously collaborated with the likes of Rhodri Davies and Beatrice Dillon, Railton considers her musical zone to be at the fork of 3 musical roads: classical instrumentalism, improvisation and hard edged electronic music. Shifting between cello improvisations & her table of modular turns, the moments of melodious velveteen passages are aptly offset by sinewy collaged interjections. The M1 headlights fade with this enigmatic accompaniment to the first glass of G&T.

GET THE FULL EFFECT

Particular highlights of the Friday came from a superbly executed dose of minimal, pounding industrial electronica with live string quartet and visuals by Craig Leon. The rendition of Nommos, which has been described by Julian Cope as “the missing link between the proto-industrial rhythm and drone of Suicide and whole minimalist…method of Terry Riley and La Monte Young” certainly delivered on all accounts, churning up our senses, causing a rattle in the spaceship, hurtling us off in to the night…

…into a gloriously cataclysmic finale to proceedings in the Sage with Irreversible Entanglements. We were lucky enough to have Moor Mother as artist in residence in our MOOG Soundlab & perform on Supersonic Friday this year, and to see her perform again is such a thrill. With the abrasive lyrical lament from Camae Ayewa (Moor Mother) at the helm, this is a free-jazz group in it’s rawest form. Sax, trumpet, doubles bass and drums conjuring an endless riptide of furious energy, with sudden surges of synth and poetic flows from Moor corner. Free-jazz hasn’t slapped me round the face like that in a long time. A much-needed awakening.

Off we went into the night for the first round of after-party at The Star and Shadow where we had perhaps a little too much fun. Strapped into our seats in the awesome setting of this independent cinema venue, after getting us truly [Terry]-riled with his riveting speech around noise interference, earth signals and alien landings in Gateshead, John Bowers blew us in to the stratosphere with his ‘Gateshead Soup: A Mythogeosonic Investigation’. Another final highlight and sign-off to the evening came from the pointy nails of Mariam Rezaei, artistic director of The Old Police House, who smashed her way through a gnarly turntable noise set, obliterating the evening into space-dust. Taxi!

After a weirdly warm stroll to the Baltic, where sadly no bloomin’ exhibitions were on until Oct 19th (poor timing, again), a delicious expresso martini with a panoramic view of the Tyne got us pepped for round 2. As well as a bucket load of fried fish from the little shack on the river. Bosh! Good to go. [RIP the taco place that once stood in it’s place though, them was delish.]

From early-on minimalistic noise ramblings of Saboteuse, via the contact mic’d up buttons on the waistcoat of Marlo Eggplant through to the 33 years of accumulative wonky cesspool rock and roll from Ceramic Hobs, Saturday night offers no let-up on the senses. Noise set from Otomo Yoshihide begins to cement my preferential taste in turntable bashing over the second half of guitar crooning, the former omitting much more unusual grit to get stuck in your teeth.

Guitar and percussion duo 75 dollar bill close proceedings with a whirling, Sun-Ra esque groove, shifted more into dessert blues territory, but we have to admit, it’s the Star and Shadow we have in our minds eye now. And it doesn’t disappoint. Another sterling offering of afterparty programme of noise-makers too numerous to account for. Plus, the Saturday night delirium may have somewhat set in. Cassettes, machines and 6-deck polymorphic club collisions, the Star and Shadow gave an unrelenting, DIY offset to the HD setting of the Sage. The 2 venues working alongside one another like a perfectly matched fine wine and a ciggy. Closing the night with a much-needed clubby DJ set, Steve Warwick brought a euphoric finish. 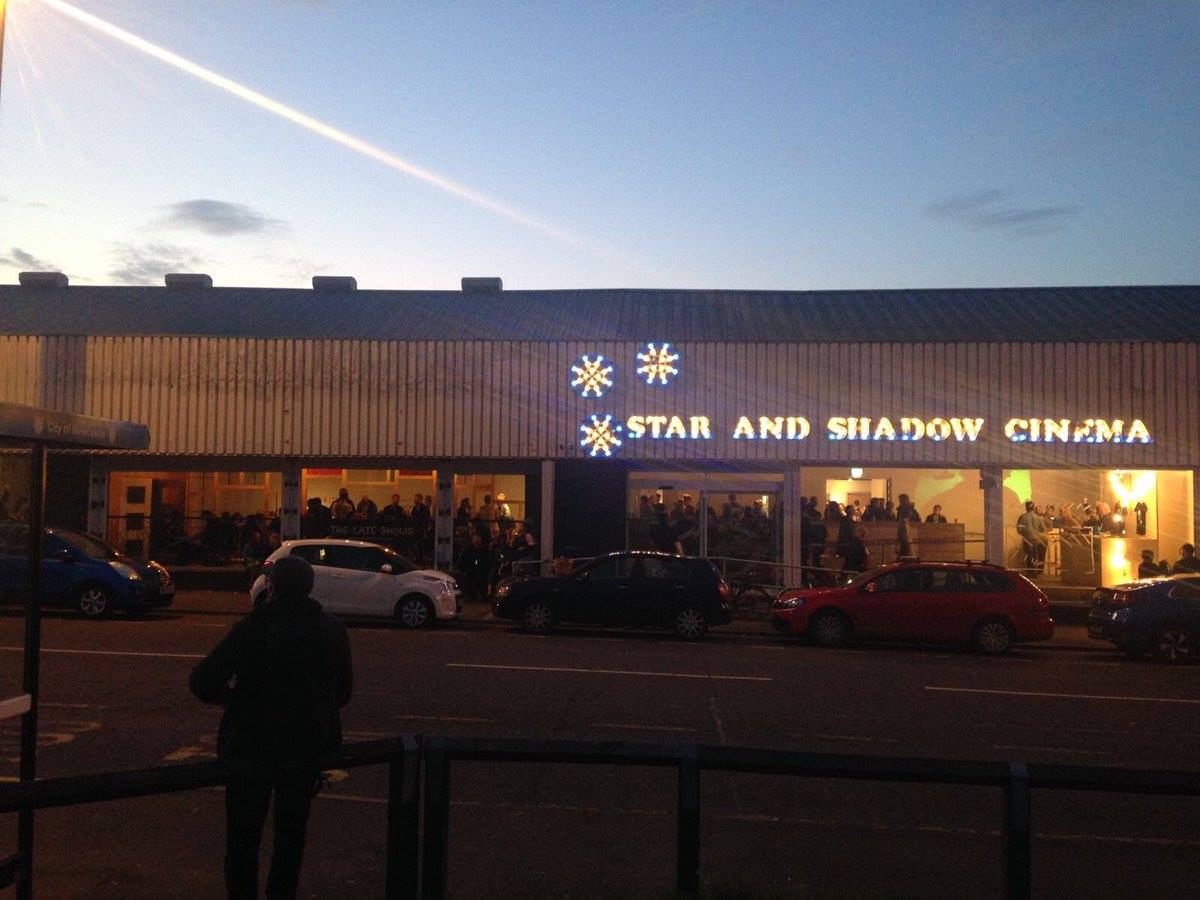 After a gradual Sunday start, with some delicious street food at the Hawker yard on the Tyne, a mere 2 minute walk from TUSK and situated next to an uber trendy brewery, guided by our feet and legs alone with our brains trailing slowly behind, we made it to the Sage for 5.30pm (good going, we think). A blissful live film & score from Seb Bassleer & Martin van der Glas, ‘Rajahstan live cinema’, transported us into the holy Indian city of Pushkar. Their audio-visual remix of their travels here captured beautifully the spirit and music of a place at once so far removed from yet strangely familiar to our own. Beguiled by the musicianship of trad instrumentalists – we call it extended technique, to them just an extension of being.

Another soothing and well-timed Sunday performance, Lea Bertucci presents Double Bass Crossfade. Taking place in the foyer area of the building, opening TUSK out to an array of audience, the improvising contra-bass players drifted slowly towards one another, building in intensity and away again to far corners of the room. Surrounded by multiple speakers and subs, darkness having fallen outside, glimmering reflections of the City in the Tyne behind, the effect was pretty magical.

Sunday in fact, was magical all around. Hameed Brothers Qawwal and party in a new venue, the largest room in the Sage, breathed new life in to the festival and reduced us to tears. Mainstays of Bradford’s South Asian music scene for over 3 decades, the trance-inducing sonic tapestry lifted the audience to their feet in rapturous applause. I have to say, my personal favourite performance.

Terry Riley and son Gyan gave an equally emotive, inspiring performance. The duo slipping through musical telepathy only family is capable of. Shifting from piano/guitar improvs to bizarre synth/noise interludes that provided sonorous surprise amidst the minimalist approach.

An act we were looking forward to having listened to the TUSK Freakzone playlist en-route up to Newcastle was Dale Cornish and he did not disappoint. His deconstructed techno, disco ball delirium and charmingly cheeky manner interjected the softness of Sunday with a hint of party. But that momentary nod was the only one we’d be having on our final day.

Closing noise ensemble Konstrukt & Otomo Yoshihide provided a befitting end to any alternative-5th-dimension-3-day-rattle-around-a-spaceship. Having efficiently shifted our brains away from our skulls for one final time, it was time to stroll, uber, and reassemble in sleep.

It’s safe to say, the drive home on Monday wasn’t pretty, but we’d do it all again. Fair play TUSK. A festival on the cusp. A line-up exploring the fringes of worlds. Providing belonging to those that don’t belong. It’s so great to know you’re there too. Another home for us weirdos away from home. With love from Supersonic.

& CONGRATS ON A BLINDING 4-STAR REVIEW FROM THE GUARDIAN