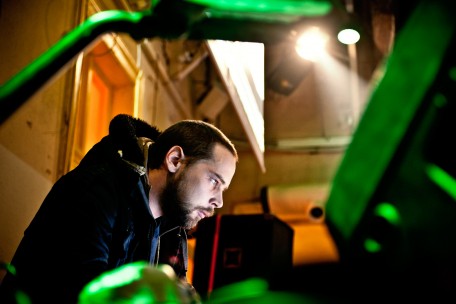 We’re super excited for our show at Vivid Projects as part of Outlands Tour 3. Get to know the artists and involved in the upcoming part club night/ part installation…

Grischa Lichtenberger is an electronic music producer, visual and installation artist living in Berlin. Having grown up in a withdrawn farmhouse, his artistic approach developed from surveying the landscape, and despite a fairly concise release history, Grischa Lichtenberger is an artist whose work is both intriguing and beguiling in equal measure. His compositions are often referenced in the context of artists like Autechre or Aphex Twin, yet have a sense of being developed in isolation and against popular trends.

The aggressive tone in his sound gives an emotional depth to the musical structure – a hermetic idiosyncrasy of rhythm and melodies that implement a personal handwriting into the arrangement and sound elements. The music aims toward introspective moods on the dance floor, tumbling between funky, highly energetic beats and trembling, concerning melodies that reach out to the individual listener.

His immersive live performances oscillate between abrasive, aggressive compositions and intricate structures of beat and melody. Technology appears in the mix, but definitely not as a perfect, mathematically defined form. Instead, he speaks in hyperlinks, misusing gear and feeding computers into other computers to form feedback loops. He’s finding a unique and creative materialism in digitalised music, making something very physical, that carves its way into your ears.

COME SEE FOR YOURSELF!! Get tickets NOW to see them live on November 9th.