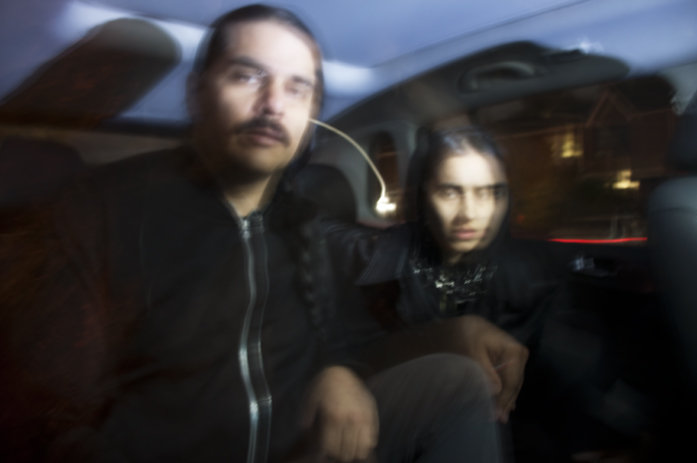 “…a hallucinatory evocation of both noise and dance traditions, a lovely nightmare from which you won’t soon wake up.” – Noisey

New York duo Wetware are key reminders of New York’s long history of dance music and confrontational performance. It’s something which is immediately clear in their music. The feeling and influences that infects the Brooklyn-based duo – whether it be taken from within the late 70’s No Wave canon projections through venues like the Mudd Club or the downtown avant-garde galleries- allows Wetware’s overall being as a cohesive and confrontational unit as enigmatic as it is familiar.

Their live shows offer all sorts of barely human vocalisations– humming, murmuring, and alternate bleating– combined with a swell of abstract crackles and broken down drum parts which whirl around the stage. With the requisite accompaniment of strobes and fog, Wetware’s perfromance is transportive, taking the audience into another realm where language is unsettled but everything is incredibly, unspeakably loud.

Formed in 2015, Wetware eased into its performative role with their live shows around their home city. Vocalist Roxy Farman stole audience’s attention immediately, using her body in tandem with her voice as a weaponized vehicle for the band’s anxiety filled performance. The synergy that has developed between Farman and electronic counterpart Matthew Morandi has been explosive.

The music they’ve released over the last few years has been similarly snowblinding. Starting from 2016’s self-titled tape on Primitive Languages, they’ve endeavoured upon a uniquely unsettled exploration between noise music and the dancefloor, their live antics and behavior causing alarm amongst local audiences, something which has branded Wetware the group to “not be missed”.