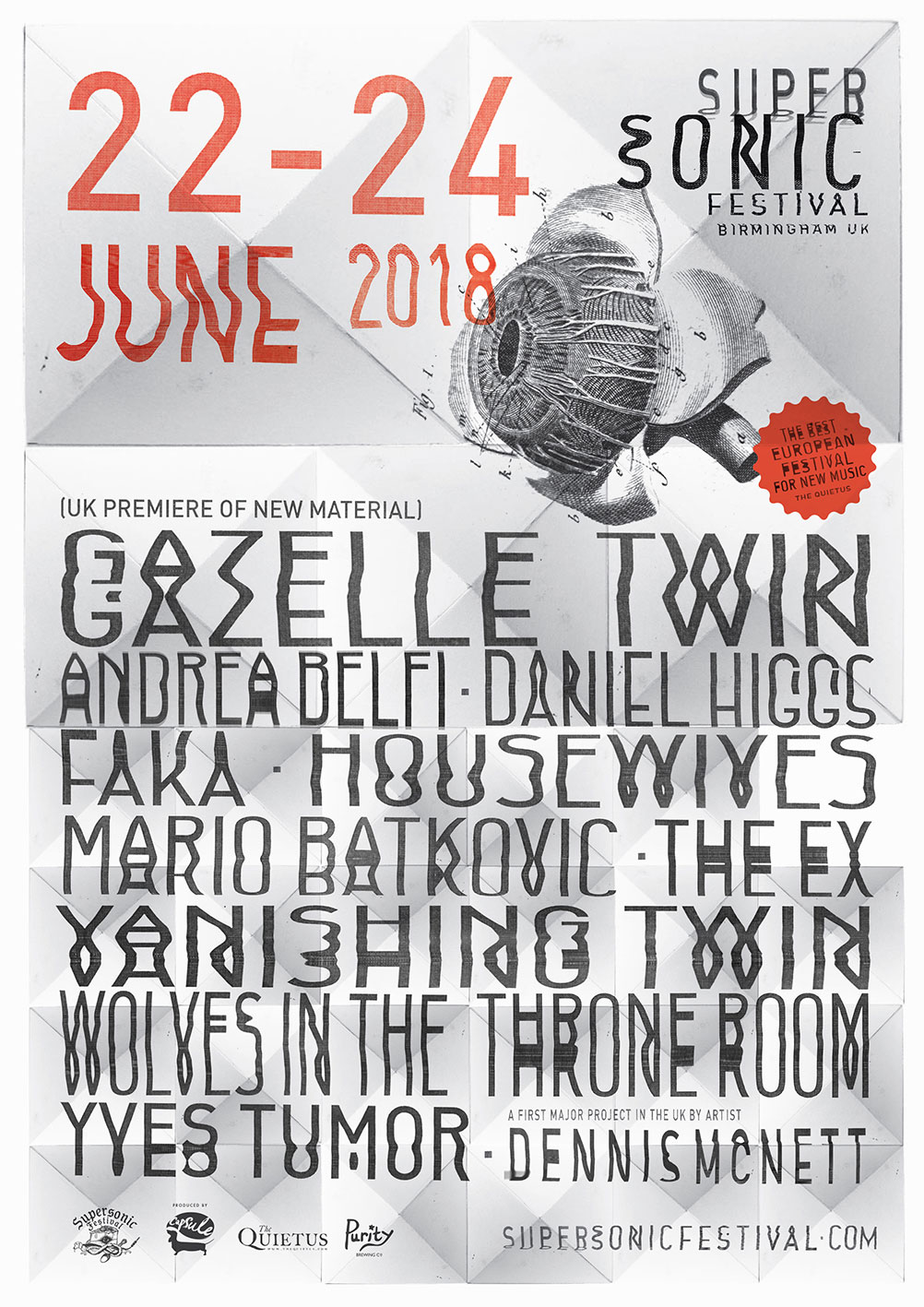 Supersonic Festival 2018 returns to the cultural hub of Digbeth in Birmingham between 22nd and 24th of June. Following our sell-out early bird ticket release and the unveiling of our Dennis McNett project, we can now reveal further delights in the shape of our first ten acts:

This year Supersonic is championing an array of ambitious, fiercely independent, and progressive artists, each committed to doing things in their own unique way. 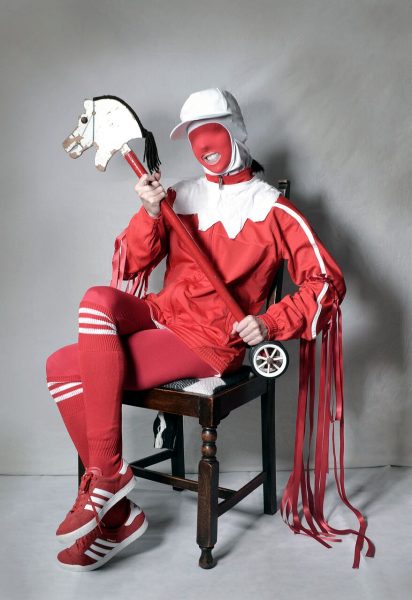 Having first appeared at Supersonic in 2015 as one of the Festival highlights of that year, we are delighted to invite Gazelle Twin to perform this year. Supersonic shall play host to the UK premier of brand new material.

38 years strong, innovative Dutch group The Ex form a riot of sound and fury that’s both sonically adventurous and feverishly compelling. They incorporate a wide array of influences, often from non-Western and non-rock sources, which include Hungarian and Turkish folk songs, and more recently music from Ethiopia, Congo and Eritrea. Supersonic are inviting them to perform this year’s Kids Gig (following Melt Banana’s wild show last year). The Ex will also perform as part of the main festival programme. We couldn’t be more delighted, and we’re certain the kids will feel the same!

Supersonic Festival are especially pleased to invite MARIO BATKOVIC, the Swiss, Bosnian-born accordion player, who shall continue his mission to expand the possibilities of the instrument to its very outer limits. Through the accordion he’s been able to channel an unbound desire to explore and express, a freedom that he has been denied through the various physical, social, cultural, and political borders that have existed in his life.

Edging, shifting, and ultimately detonating the boundaries of electronica, soul, rap and rock music into a liberated wilderness of intrepid pop, YVES TUMOR impresses a chaos that is at once memorable, unquantifiable and signature to front man Sean Bowie’s genius. His music and performances show equal reverence for light and dark, weaving between sounds of melody and harshness, creating a brave narrative which transcends existing definitions of sound and culture for all to discover. 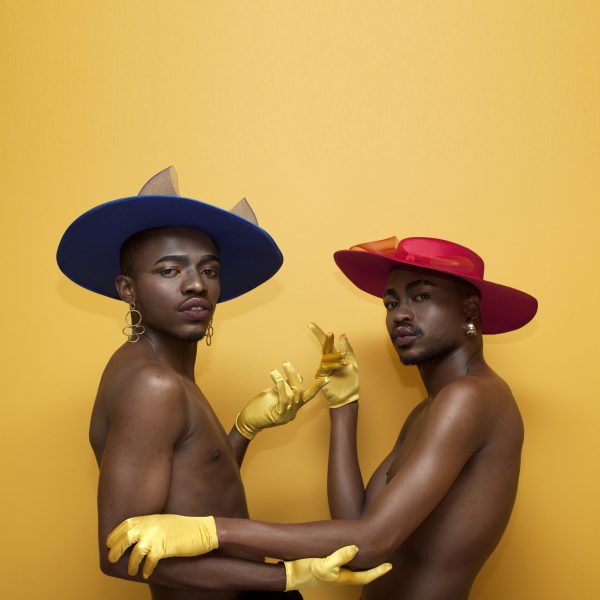 FAKA is a South African music and performance art duo comprised of best friends Fela Gucci and Desire Marea. The artists explore a combination of mediums ranging from sound, live performance, and video to create an eclectic aesthetic with which they express their ideas about themes central to their experience “as black queer bodies navigating the cis-hetero-topia of post-colonial Africa”.

WOLVES IN THE THRONE THROOM re-imagine black metal as an ode to rain storms, wood smoke and the wild energies  of the Pacific Northwest. The listener encounters crystalline metal riffs and ritualistic laments that sing of endless rain falling upon ancient cedars. Their music is a doorway into a mythic ethereal heathen landscape entered through music, magic and dreams. Wolves shall share their blazing, furious and potent form of Black Metal that they alone can create.

We count ourselves very fortunate to have Baltimore native, and lyricist/frontman of Lungfish, DANIEL HIGGS perform at the festival. With three decades of artist output, his art is of the cosmos, we on Earth are merely lucky that it happens to be confined to our atmosphere, in our lifetime. 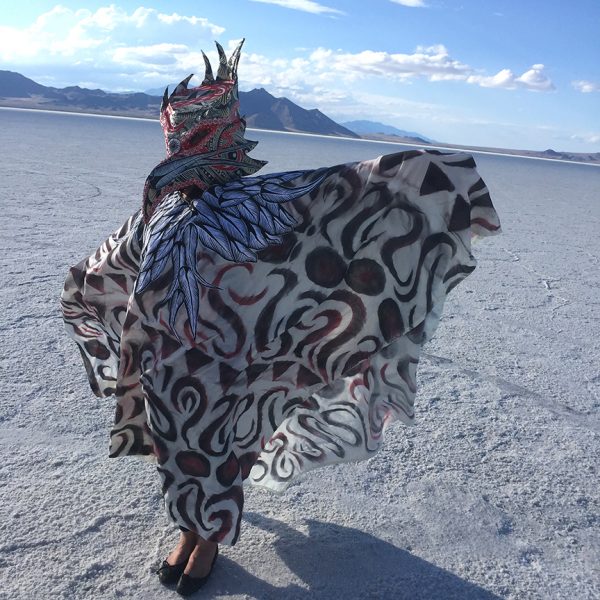 This June, we bring to the back streets of Digbeth the FIRST EVER major project in the UK from prolific artist, DENNIS MCNETT. Our Artist in Residence, Dennis will produce a NEW large-scale work to embody the beating heart of this year’s festival, using Supersonic musicians and audience alike.

Find out how you can get involved and help support this MAMMOTH project HERE!

…Plus there’s still many more acts, and extra curricular activities to be announced in the coming months. In the meantime, please find ticket purchasing info below, and feel free to get in touch with any questions.

“Whilst Supersonic deals superbly in experimental music, it also doesn’t take itself too seriously and alongside the mind-altering music, record fairs and pop-up stalls, activities such as black-metal life drawing or Black Sabbath karaoke are offered, as well as events and gigs for children. This thoughtfulness leads it to be a deeply experimental weekend but also a genuinely accessible one too. During a period in which many line-ups of alternative festivals are becoming increasingly uniform, Supersonic brightly stands out as a true alternative to the alternative.” – INDEPENDENT 4*