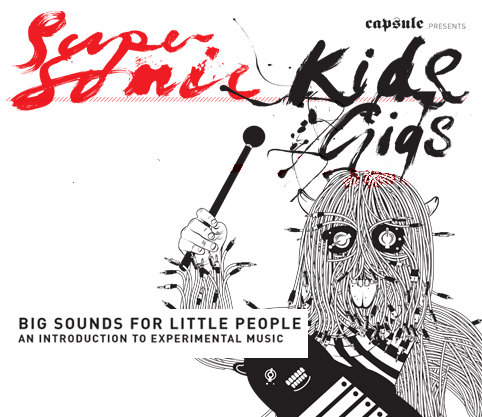 We’re delighted to announce that our next  Supersonic Kids Gig will be taking place at the mavelous Sineater Festival in Shropshire on Sunday 19 June. Featuring a live performance by Tor Invocation Band.

Ever since Schoenberg and Kandinsky became pen pals back in 1907, avant-garde art and experimental music has been attempting to find some common ground. But, it’s not been easy. Here’s Capsule’s contribution towards a solution: Supersonic Kids Gigs ‘Big Sounds for Little People’. If you couldn’t guess from the snappy title, it’s a gig for kids and their families, which aims to introduce children to experimental music at an early age. Kids Gigs provide a fantastic opportunity to show children the beauty of live music.
Recommended for kids under 10

Tor Invocation Band is an ever evolving project led by Jake Blanchard, the music is largely improvised and the lineup for the band is ever-shifting and has involved members of Woven Skull, The Family Elan, Core of the Coalman, United Bible Studies and Sam and the Plants amongst others. Mangled dilapidated drone meets ecstatic disintegrating psychedelia.