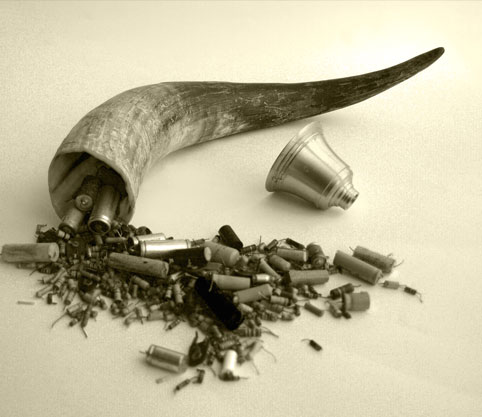 We’re happy to announce that this year Supersonic will host a Dirty Electronics Workshop at the festival. Weekend ticket holders can sign up now to take part in the workshop, which will take place from 3 – 5pm on Saturday 13 June. Participants will devise and make their very own synthesiser/ sound object. It will feature printed circuit board artwork and a DIY piezo flared horn that omits bursts of noise and generative electronic bell-like sounds.  It also comes with a rustic stick beater.

How to sign up
If you are a weekend ticket holder, you can sign up to the Dirty Electronics workshop at this year’s Supersonic Festival and become part of the Dirty Electronics Ensemble. There is also an additional charge to cover the cost of the materials (£34). Places are limited to just 15 so book your place now: email ‘dirty electronics’ in the title to russell[at]capsule.org.uk

A Bit of Background

Musician and composer John Richards coined the terms Dirty Electronics and Punktronics to describe his approach to electronic music, which is free from corporate technology restraints and focuses on a DIY ethos. John has been using this approach since 1999 to explore composition and performance with self-made instruments and found objects.

In 2003, John formed the Dirty Electronics Ensemble, a large collective predominantly made up of workshop participants. Their activity focuses on shared experiences and ritual and social interaction through devising and building instruments.  Following the creation of the instruments, the group take to the stage to play and explore them. In Dirty Electronics, process and performance are inseparably bound, with the whole concept beginning on the workbench.

The group have collaborated with and performed pieces written by artists such as Merzbow, Nicholas Bullen (Napalm Death), Chris Carter (Throbbing Gristle), Dominic Butler (Factory Floor) and Anat Ben-David (Chicks On Speed), amongst many others. Workshops and performances have been commissioned worldwide including by Barcelona’s Sonar Festival, Southbank Centre, Bent Festival (Los Angeles), Tokyo University Of The Arts, Berlin’s University Of The Arts and IRCAM (Paris).

The Mute Synth
In 2011, Dirty Electronics were commissioned by Mute Records (home of Swans, Liars, Ben Frost, Can, Nick Cave, New Order and Depeche Mode) to create a handheld synth with artwork designed by Adrian Shaughnessy:

In 2014, a follow up, the Mute Synth II, was released accompanied by an album featuring artists associated with Dirty Electronics and Mute Records.

A number of other artwork-sound circuits have been developed by Dirty Electronics including a 20th Anniversary synth for Sonar Festival and circuits inspired by the work of William Morris for the National Portrait Gallery.