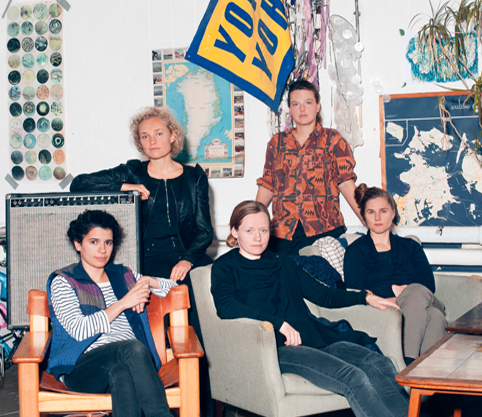 Selvhenter, are part of the bustling and sprawling Copenhagen underground. In a controlled eruption of two drum kits and distorted trombone, violin and alto saxophone, they kick against rationalism and the homogeneity of welfare society, showing us that passion doesn’t have to be sung, but can flourish as collective instrumental cramps.

Selvhenter has been active for seven years, performing with influential outfits like the Swedish-Norwegian trio, The Thing, and Japanese drummer, Yasuhiro Yoshigaki’s Orquesta Libre.

The band has honed an uncompromising, boundless sound that blends experimental rock, improvised free jazz and punk, noise and metal. With 2014’s LP, Motions of Large Bodies, Selvhenter has taken their music to a new level, incorporating a strong funky element alongside their characteristic elements of drones, open-minded playfulness and the central polyrhythmic patterns of the two drummers. There are groovy, danceable beats, horns and violin soaring into the sky with drones and long-stretched melodies. Live, the band takes audiences on a trance-like road trip with myriad interesting and at times, surprising, detours.