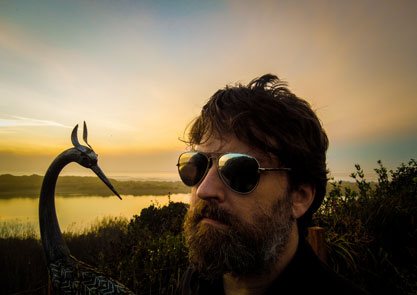 Six Organs Of Admittance‘s Ben Chasny is an artist as prolific as he is chameleonic, with his recorded output ranging from sunny, free flowing folk to shimmering dronescapes and scorching elongated jams. Chasny has a restless intellect, which has regularly guided the progress of his creation. A lyrical mastery of acoustic finger-picking would be enough to build a body of work for most musicians; this is just the stepping-off point for Ben. From the earliest days of private-press psych home recordings, Six Organs of Admittance has sought out alter- native spaces in which to make music and has challenged his audience to keep up with his rapid advances into new terrain.You can never be completely sure what Chasny has in store for you when it comes to the band’s live performances.

Ben will also be hosting a workshop to explain his Hexadic System.
Over the last two years, Ben has assembled a comprehensive system of musical composition. Designed to free sound and language from rational order and replace calculation with indeterminacy, THE HEXADIC SYSTEM is a catalyst to extinguish patterns and generate new means of chord progressions and choices.