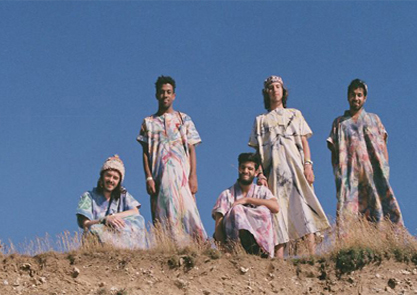 Delirious, intense and uplifting, prepare to be carried away to a distant shore of your imagination with Flamingods. The captain of the five piece multi-instrumental band is Kamal Rasool, who, along with fellow band members, was inspired to write 2014’s excellent LP, ‘Hyperborea’ after new Visa laws forced him out of the UK. ‘Hyperborea’ is the namesake of a mystical island of Flamingods’ own creation, affirming the imaginative boundlessness of their musical and aesthetic universe. Explorative both thematically and aurally, the music addresses themes of identity, belonging and alienation whilst also day dreaming of leaving to foreign far away lands. Now based in the UK, the band is often described as ‘ethnic pop’, which refers to a heady and utterly unique mix of noise, psychedelia, tribal and freak folk.
Seeking to create both vivid and vague scenes inspired by foreign cultures from different ages and to take influence from wherever they can find it, we think Flamingods will be a truly inspiring addition not only to Supersonic’s core programme, but also to our special Kids’ Gigs series, which aims to introduce children to the joys of experimental music. And we haven’t even mentioned their matching psychedelic robes yet!